RNLA Pilatus PC-6C H2. Pilatus PC-6C H2 Turbo Porter in a fictional Royal Netherlands Army livery. The PC-6C Turbo Porter has been an amazing contribution to the STOL aircraft fleet around the world for decades. Its robust airframe and excellent aerodynamics make the plane very popular for para-d...

RNLA Pilatus PC-6C H2. Pilatus PC-6C H2 Turbo Porter in a fictional Royal Netherlands Army livery. The PC-6C Turbo Porter has been an amazing contribution to the STOL aircraft fleet around the world for decades. Its robust airframe and excellent aerodynamics make the plane very popular for para-drops, but also for supply missions in remote areas throughout the globe. Despite its age the aircraft is still widely in use. This repaint represents a "what-if" livery for the Royal Netherlands Army (RNLA). In the far past the RNLA could depend on the Beaver and similar aircraft for light support and small batch para-drops (later the Fokker F-27s performed these tasks). Nowadays they are performed by the Dutch "Defence Helicopter Command" (AS-532U2 Cougars and CH-47D Chinooks) and by the 336 Sqn C-130s. This livery resembles a fictional light utility aircraft registered to the Dutch Army, with corresponding low-visibility (and night-ops optimal) color scematics. The emblem and aircraft name belong to the "Korps Commando Troepen", the Dutch Army Special Forces based at Rosendaal. The name "Achnacarry" denotes the place in Scotland where the Dutch Commando Unit was founded in WWII. You need the freeware PC-6C H2 Turbo Porter by Tim Conrad (PC-6C_H2TURBOPORTER.ZIP) in order to use this repaint. By Rene Spaan.

Installation:
1) Unzip the downloaded zipfile and copy the texture.RNLA folder to the PC-6C_H2 folder in your Microsoft Flight Simulator X/SimObjects/Airplanes folder. 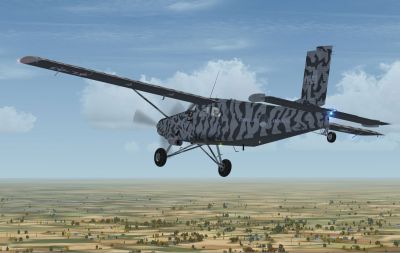 The archive pc-6c_h2_rnla.zip has 26 files and directories contained within it.