KLU ISAF Pilatus PC-6C. A Pilatus PC-6C H2 Turbo Porter for FSX by Tim Conrad in a Royal Netherlands Air Force livery. The PC-6C Turbo Porter has been an amazing contribution to the STOL aircraft fleet around the world for decades. Its robust airframe and excellent aerodynamics make the plane ver...

KLU ISAF Pilatus PC-6C. A Pilatus PC-6C H2 Turbo Porter for FSX by Tim Conrad in a Royal Netherlands Air Force livery. The PC-6C Turbo Porter has been an amazing contribution to the STOL aircraft fleet around the world for decades. Its robust airframe and excellent aerodynamics make the plane very popular for para-drops, but also for supply missions in remote areas throughout the globe. Despite its age the aircraft is still widely in use. This repaint represents a "what-if" RNLAF PC-6C in 336 Sqn colors. 336 Sqn has been a Dutch Antilles based Air Force MARPAT unit operating F-27MPAs. Currently the Sqn operates four C-130s from Eindhoven AB, with a new Sqn logo. This PC-6C is (fictional) operated by two ULF (Utility and Liaison Flight), 336 Sqn. The flight is designated to operate anywhere in the world. This livery resembles a unit operating from Tarin kowt (Tereen (OATN)), Uruzgan, Afghanistan 2009 under ISAF mandate, and in support of the Dutch Task force Uruzgan, Tarin Kowt, 2009. The aircraft shares the same registration as the previous livery (PC-6C_KLU.ZIP), but weathered, tone-down grey and 37 years later. You need the excellent freeware PC-6C H2 Turbo Porter by Tim Conrad (PC-6C_H2TURBOPORTER.ZIP). By Rene Spaan. 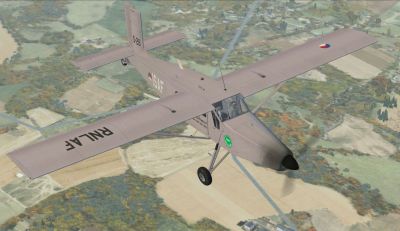 The archive pc-6c_klu_isaf.zip has 22 files and directories contained within it.