Horton Tower, UK. This seven storey tower is situated on high ground near the village of Horton in Dorset, England, and has been restored by a mobile phone company who use the upper story to discreetly mount several of their antenna. It is approximately 12 km northwest of Bournemouth International Airport and 18 km south east of Compton Abbas airfield and forms a useful waypoint between the two. Created by Andrew Ford. 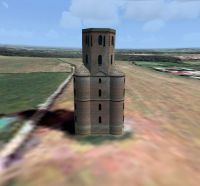 NOTE: If possible please refer to the enclosed README.pdf

The Tower:
Horton Tower (aka Sturt’s Folly or Horton Observatory) is situated on an area of high ground near the village of Horton in Dorset, England. It is approximately 12km North West of Bournemouth International Airport (EGHH) and approximately 18km South East of Compton Abbas airfield (EGHA). As such it forms a useful waypoint between the two.

This seven storey tower is said to be approximately 47m high, but my measurements make it closer to 29m. I believe the discrepancy may be due to the loss of the tall dome which illustrations show used to form the roof of the tower. This could easily have added an extra third to the tower’s height. It is said to have been build by Thomas Sturt the Elder in 1726, either as an astronomical observatory or so he could follow the progress of the local hunt. Having fallen into disrepair it has been restored by a mobile phone company who use the upper story to discreetly mount several of their antenna.

The Scenery:
This FSDS v3 scenery was designed for and tested with FSX and Horizon Simulation’s VFR Generation X Volume 1 “Southern England & South Wales”.
However, it was created using MakeMDL and BGLcomp from the FS2004 SDK and therefore should also be compatible with FS2004 and Horizon Simulation’s VFR Terrain and VFR Photographic Scenery, England & Wales: Part 2 (also published by Just Flight as VFR Photographic Scenery Volume 2, Central & Southern England).
Crucially, the altitude above ground level (AGL) was set to zero in the XML file, so it’ll sit atop any terrain model (mesh) you might be using (inc. the default in Flight Sim mesh).

This scenery is released as Freeware.

The archive hortontw.zip has 13 files and directories contained within it.