Lewisporte, Newfoundland, Canada. A fictional airfield based around the real world town of Lewisporte in Newfoundland, Canada. This scenery was originally designed for use with the A2A Piper Cub with AccuSim, but should be accessable to any small STOL aircraft with a single grass and a single water runway. Includes replacement coastlines and a number of lakes missing from the default scenery. By Ian Pearson.

Neither the town of Lewisporte itself, nor the lakes or bay around it, are fictional. The town lies on the North coast of the island of Newfoundland, approximately 50km from the airport at Gander, which was instrumental in early Transatlantic travel.

With the release of the A2A Piper Cub and Accu-Sim pack, I was looking for suitable places to build a little airport suitable for using it from and a certain member of A2A suggested that he'd quite like an airport in Canada - suggesting an island in the middle of one of the Great Lakes which, in the real world, has a perfect little Cub base. Unfortunately it isn't visible on Google or Virtual Earth as the resolution for the island is awful and not only that but the island is present in the sim - just flat as the proverbial pancake, with barely a tree and an autogen building to make it more interesting.

Having given up on that suggestion, I went off looking for somewhere else a little more appropriate and, purely out of entertainment value, punched a few friends' names into Google Earth to see what came up... Considering who I was discussing the potential base with at the time, finding Lewisporte was rather fitting to say the least.

So. Here we have my first moderately successful attempt to not only build an airfield for FSX, but also to build an entire coastline, rather than just adding in lakes.

Finding appropriate landclass to represent such a long and narrow settlement was something of a challenge to say the least and, I'll be honest, I don't think I really succeeded in that. However, the town is represented reasonably accurately, the coastlines and lakes are a vast improvement over the default and it was an interesting learning experience for me, if nothing else, so I thought I'd make it available to anyone else who wants it.

This scenery only uses default SDK objects and techniques, with the result that unlike my moderately naff WW2 RAF bases that people may have seen, it doesn't require any additional downloads to work. Therefore the installation and removal of the scenery is relatively simple:

2) Launch FS, and through the Scenery Library editor, add the directory "Addon Scenery\IJP_CYLE".

Remove the entry from your scenery library, then delete the "IJP_CYLE" folder.

There are no navigational aids at Lewisporte - it's not really big enough to need them. Fortunately, however, it is not difficult to find, either.

The easiest way to do so is using the FSX "Go To Airport" option. The fictional ICAO code "CYLE" will take you right there, with a single grass runway and a single water runway on the adjacent lake available to use. There are a small number of parking spots and some default AI (a couple of Cubs and a Maule) to give the place some life.

If you wish to fly to the settlement, it is approximately 50km (this is Canada, sorry to those who only understand miles! ;)) from Gander on a heading of approximately 335 degrees. You should see some lakes amongst the trees just before you get there and the town is at the southerly end of an inlet.

It was suggested to me by a couple of people who tried a beta copy of this scenery that it would be worth including some hints and tips for operating from and around Lewisporte, so here they are:

...is short and tight if you have autogen on.

A number of people found that they had difficulty getting out of the lake on a flat calm day, particularly with relatively warm weather set, if they used the A2A Cub on floats and Accu-Sim with Heidi on board and full fuel tanks. It is possible, but you have to bear three things in mind

1) the water runway on the lake is only a guide, you can use the entire surface area available. Water taxying back to the beach, then turning and taking off, gives you more room to get speed up and climb over the trees.

2) This is bush flying, not controlled airspace. Immediately after clearing the water, you can turn to follow the treeline if you are having real problems getting out.

3) Zero wind is actually pretty unrealistic. Try it with real weather loaded, of give yourself a gentle wind on the nose. Even 5kts will probably be enough to get you out.

Slightly unrealistically, Newfoundland in FSX is smothered in trees. Literally smothered. There a millions of them and, at high autogen settings, this is going to make your machine struggle.

Unfortunately, the obvious fix of "turn down autogen" also removes the buildings from the town. If you are really struggling, even after decreasing your autogen and detail radius sliders, you do have another fall back that you can use. In fsx.cfg there is an option entitled "TERRAIN_MAX_AUTOGEN_TREES_PER_CELL" which can be reduced (Back up your fsx.cfg first!!!) to decrease the number of autogen trees grown and improve frame rate, while retaining the buildings in the town.

The objects used in this base are from the default libraries of FSX Deluxe. It has not been tested with FSX Standard, but should work without any issues. It will not work in FS9.

Tools used during the development of this scenery were:
Airport Design Editor by Scruffyduck Software.
SBuilderX by Luis Sá.

The screenshots provided within this zipfile are courtesy of Nick Churchill. 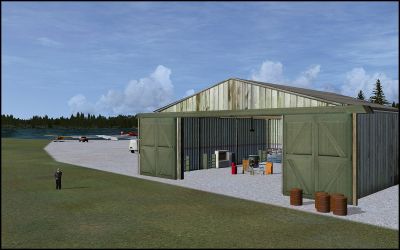 The archive ijp_cyle_v1_0.zip has 17 files and directories contained within it.