Copy the 'Grob115' folder to your FSX 'SimObjects/Airplanes' folder. This folder includes both David Garwood's Grob Tutor and Andy Nott's two university paints for the aircraft.

Copy the 'Grob Vigilant' folder to your FSX 'SimObjects/Airplanes' folder. This is Bob May's Vigilant motor glider. Since these two aircraft are intended for ai use only, I have not included panels, however FSX does use sound files for ai, so I have included a suitable sound folder for each.

Do not rename these two aircraft folders - the ai Traffic file expects to find these two folder names to display the seven ai aircraft in the pattern.

Copy the main 'RAF Woodvale EGOW' folder with its 'Scenery' and 'Texture' folders to your 'FSX/Addon Scenery' folder. The complete path should read 'X:\FSX\Addon Scenery\RAF Woodvale EGOW' where 'X' is your FSX partition. The texture folder is currently empty - but its inclusion may prevent problems later.

The 80 agn files should be placed in the folder:

- the address on my FSX installation is:

You may overwrite any existing agn files without causing any problems, (but see my warning re using those agn files with FS9) however it is always prudent to backup any files prior to overwriting should you wish to backtrack and delete any modifications at a later date.

will find these additional agn files and load them automatically with their corresponding GenX BGLs.

If you are unfortunate in having low frame rates, then these files may be removed from the GenX texture folder. They do load a considerable number of additional autogen trees and buildings, and that may reduce your frame rates too much. This reduction in the frame rate occurs mainly in turns, and I must admit that I haven't seen much of an increase in FR after their temporary removal.

I would suggest that removing or temporarily renaming the traffic file 'Wv Road Traffic.bgl' would offer a more effective increase in frame rates than disabling the autogen. Your results may be different. But if you are a committed FSX flyer like me, you may prefer to have that very realistic traffic movement on approach...having flown in a Warrior several times on that R26 approach, I consider that that moving Bypass traffic is very necessary...

Finally, add the folder 'RAF Woodvale EGOW' to your scenery listing. Any problems, contact me.

You should have the following folders & files: 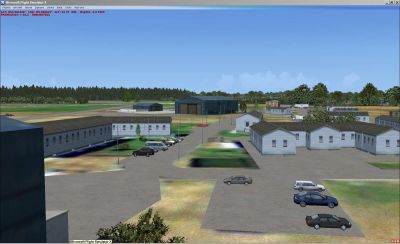 The archive rafwoodvaleegow.zip has 138 files and directories contained within it.

Just downloaded and run this add-on and made m'self extremely homesick !!