Teterboro Airport (KTEB), NJ. Teterboro Airport is located across the Hudson River in New Jersey, just 12 miles from midtown Manhattan. Teterboro Airport is considered a general aviation reliever airport. As a reliever airport, it does not offer scheduled airline service, nor does it permit operations of any aircraft in excess of 100,000 pounds on any airport surface. Teterboro Airport has five fixed base operators (FBOs), Atlantic Aviation, Jet Aviation, First Aviation, Meridian, and Signature Aviation. Teterboro - KTEB version 2 includes the latest Google Earth photo texture that depics the completed construction work of the taxiways and aprons. Photo texture includes summer, fall, winter, and spring variance textures. Night textures also included, along with snow textures in the winter months. Vegetation autogen has been re-worked. All taxiways, taxisigns are present and depicted to real life. Custom taxilights and runway ground markings included, the ground detail is exact. All stock FSX hangars have been replaced with custom hangars. Animated people and birds are found on the airfield. Numerous SAMM generated static business jets and some light general aviation aircraft are present. By Eric McCloud.

When you unzip the download, you will find one folder...."Teterboro - KTEB version 2.0"

***If you have downloaded and installed my original Teterboro scenery you will need to delete that folder from your Addon Scenery folder (Teterboro KTEB). DO NOT over-write this new version into the older version, many files and folders have been replaced and/or changed. If you have not downloaded and installed my original scenery then disregard above.

1) If you have several addon sceneries as many do, you may already know how to install. For those who do not understand, the location of where FSX is located it maybe different than mine, but usually C:\Program Files\Microsoft Games\Microsoft Flight Simulator X\Addon Scenery\

2) Next, place the Teterboro - KTEB version 2.0 folder inside the Addon Scenery folder.

3) You will need to activate it within FSX by going to the scenery library and adding it....thats it. Windows7 does have an issue with this sometimes, so if you cant install it from within FSX, then download and install the freeware Program called "Addit! Pro for Flight Simulator X", works like a charm. Just search it on the internet.

Static aircraft will be present if you have your Scenery Complexity set to Normal, if you want twice as many static aircraft showing then slide the slider to Dense.

Special Thanks:
Jon Masterson for his Aiport Design Editor
This program has far enhanced the world of FS.

*Luis Sa for his SBuilderX.
*Don Grovestin for his excellent Fencebuilder Pro Progam.
*Sidney Schwartz for this Gmax models that he allows others designers to use.
*Jim Dhaenens with his custom hangar work.
*Bill Leaming for the ramp lights.
Thanks everyone...

Thanks much and enjoy KTEB
Eric McCloud 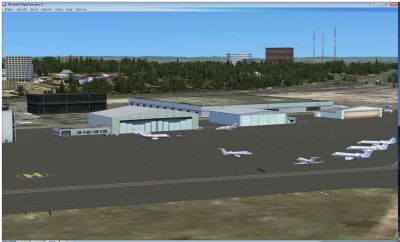 The archive teterboroktebversion2_0.zip has 202 files and directories contained within it.