NAS Jacksonville (KNIP), Florida (FL). This is the third rendition of NAS Jacksonville. Two new hangars, one helicopter hangar on the seawall and one P-3 hangar by the current VP-30 hangar have been built and added to the scenery. By Jim Dhaenens.

NAS Jacksonville (KNIP), Florida (FL). This is the third rendition of NAS Jacksonville. Two new hangars, one helicopter hangar on the seawall and one P-3 hangar by the current VP-30 hangar have been built and added to the scenery. By Jim Dhaenens.

This is the third rendition of NAS Jacksonville. Two new Hangars, one helicopter hanger on the seawall and one P-3 hangar by the current VP-30 hangar have been built and added to the scenery. Enjoy!

Most of the objects were designed for the NORMAL setting for Scenery Complexity. I used normal Autogen, but that's entirely up to you.

For others, I've kept a number of objects separated in .bgl's that you can get rid of to save on frame rates. The names and explainations follow:

Optional BGL's (you can remove them to save on framerate):

This rendition of NAS Jacksonville works in FSX only. This is an evolutionary airport versus a revolutionary one. That is to say that some of the custom buildings, runways, aprons,and taxiways are are still FS9 models. The seawall tarmac and other objects were made with GMAX and the FSX SDK. Quite a few FSX native library objects were used as well. FS9 objects were made (or placed) with SceneGenX and FSDS3.

The terrain around the seawall tarmac needed to be changed to support the build of the tarmac itself. That's what all the cvx BGL's are for. If you use FSDS to try to put AI parking or taxiways in this area, things will get ugly quickly. Taxiways, parking areas and parking paths carry their own terrain with them, always at airport altitude. See the picture in this folder. Everywhere else is fair game.

Best regards and a huge amount of thanks to Arno Gerretson and all the designers (and REAL experts) at fsdeveloper.com that answered all my questions. Thanks to Bill Mackay who used to fly out of KNIP with VP-3 and helped me test the thing, and Matt Perry who helped with information (he's currently flying with VP-30), and Bob Folsom who, among other things bellied in an SNJ on RWY 27 in 1946, and sent me original pics of the ramps and 100 PBY's on the seawall tarmac in 1946...wow.

1. Deactivate and remove your current (if you have one) Jacksonville NAS folder.

3. Copy the KNIP folder to your Addon Scenery folder.

4. Activate your new scenery with FSX. 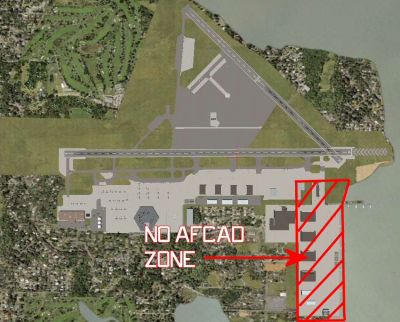 The archive knipfsx.zip has 137 files and directories contained within it.