Formosa X, RCTP Taiwan Taoyuan Int'l Airport 1. This project improves the default FSX scenery to better represent the appearance of Taoyuan International Airport as it is in 2011. All airport buildings and nearby landmarks were were custom-made using Gmax, including animated radars and people ...

Formosa X, RCTP Taiwan Taoyuan Int'l Airport 1. This project improves the default FSX scenery to better represent the appearance of Taoyuan International Airport as it is in 2011. All airport buildings and nearby landmarks were were custom-made using Gmax, including animated radars and people movers. Runways, taxiways, and aprons have been repositioned based on satellite imagery. Aircraft parking had been updated using the latest real-world AIP. A photoreal terrain of the Taoyuan area, plus landclass improvements, is also included. Part 1 of this package contains the airport scenery. Part 2 contains background photoreal textures and landclass files. By Houting Chiang, Rudolf Liu, Jack Su, Mike Huang. 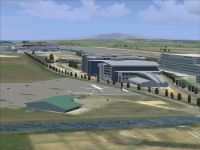 After over 30 years of operation since 1979, Taoyuan International Airport is currently undergoing its most extensive renovation and expansion to bring back its prestige as the "National Gateway for Taiwan." This will be a totally makeover project for RCTP. The first stage is scheduled to be completed in 2013 or 2014. By then, the airport will have a brand new look, such as a rebuilt Terminal 1.

1. Download both Part 1 and Part 2 of this scenery package. (This package includes both parts in one download)

2. Start FSX, and add sceneries using the menu in the following order:

- Airport layout by Rudolf Liu and Mike Huang.
- Original RCTP models by Houting Chiang, Rudolf Liu, and Mike Huang.
- Photoreal ground textures, landclass, water class, and vehicle traffic improvements by Jack Su.
- Guy Diotte for his F-104 and F-5 static model, Arno Gerretsen for his C-47 static model.
- Special thanks to all members of the Jade Air Virtual Airlines for their valuable support and suggestions during development and beta testing.

This package is supplied as freeware and SHALL NOT be used nor distributed in any manner for generating monetary profit. Free redistribution of this package is welcomed. 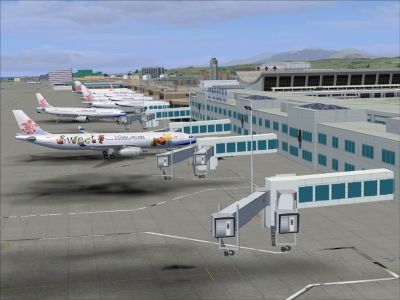 The archive formosax_rctp_01_00.zip has 7 files and directories contained within it.