Boeing PW-9. The PW-9 was much inspired by the Fokker D-VII. The fuselage was of welded steel tubing construction put together by arc-welding (a Boeing-developed technique). The aircraft was a single-bay biplane with tapered wings. The lower wing was shorter and narrower than the upper wing. The wings were of traditional wooden frame construction with fabric covering. During 1926, the production PW-9s were shipped to US bases in Hawaii and the Philippines. Gmax source included. Complete model by A.F. Scrub. 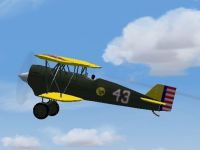 Screenshot of Boeing PW-9 in flight.

In 1922, William Boeing of the Boeing Airplane Company of Seattle, Washington committed his company to a private venture which would, it was hoped produce a fighter that would compare favorably with contemporary British and French designs. Before, Boeing's only experience with fighters had been in the production of the Thomas-Morse-designed MB- 3A.

The project was given the company designation of Model 15. The Model 15 owed a great deal to an examination of the Fokker D-VII, many examples of which had been brought to the USA after the end of the First World War under the terms of the Armistice. The fuselage was of welded steel tubing construction put together by arc-welding (a Boeing-developed technique). The aircraft was a single-bay biplane with tapered wings linked together by an N-strut. The lower wing was shorter and narrower than the upper wing. The wings were of traditional wooden frame construction with fabric covering. The aircraft was originally to have been powered by the same 300 hp Wright-Hispano engine that had powered the Boeing-built MB-3A. However, early in the design process, it was decided to switch to the 435 hp 12-cylinder liquid-cooled Curtiss D-12 (later known as V-1150) engine. A tunnel radiator was mounted underneath the nose for engine cooling.
Although the Army was definitely interested in the Boeing Model 15, they were not able to support the project financially. Money for any sort of new military hardware was hard to come by in the early 'twenties. However, on April 4, 1923, the Army signed a contract for the Model 15, in which they agreed to provide the armament and the power plant and also agreed to test the airplane. Boeing would retain the airframe and all proprietary design rights.

The Model 15 made its first flight on April 29, 1923. It was sent to McCook Field in June 1923 for testing in the Army's 1923 Pursuit Competition. While there, the Boeing design came into direct competition with the basically similar Curtiss PW-8. The Curtiss company had been so miffed by the sudden appearance of the upstart competitor from Boeing that they had initially attempted to delay delivery of a D-12 engine to the Army for installation in the Model 15.

Both the Boeing and the Curtiss aircraft quickly demonstrated that they were far superior to the MB-3A which had just entered squadron service. Although the Curtiss design was slightly faster, the Boeing design was more maneuverable, more rugged and easier to maintain. In spite of a preference for the Boeing design, on September 25, 1923, the Army placed an order for 25 Curtiss PW-8s, in exchange for the Curtiss company's agreement to participate in General Billy Mitchell's scheme for a dawn-to-dusk transcontinental crossing of the USA. Certain features of the Boeing design such as the tapered wing and the tunnel radiator so impressed the Army that they asked Curtiss to try them out on the XPW-8A. This resulted in the XPW-8B, which became the prototype for the famed Curtiss Hawk series of pursuits.

The Boeing company's financial gamble finally paid off on September 28, 1923. On that day, the USAAS purchased the Model 15 under the designation XPW-9 (serial number 23-1216) and ordered two more prototypes (serial nos 23- 1217/1218). The contract specified that certain changes needed to be incorporated in the second and third prototypes to make them conform to Air Service specifications. The second and third prototypes were delivered to the Army on May 1, 1924. A new Boeing-designed undercarriage with divided axle was later tested on XPW-9 number 1, after it had initially been delivered with the Fokker-like straight axle.
The USAAS ordered an initial batch of 12 production PW-9s (Ser Nos 25- 295/306) on September 19, 1924. A second batch of 18 (Ser Nos 25- 307/324) was ordered on December 16, 1924. The first delivery took place on October 30, 1926. The production PW-9 was based on the third XPW-9 prototype, but differed from it in certain details. The engine cowling was better streamlined, the divided-axle undercarriage with 28 x 4 wheels was adopted as standard, and the center section fuel tank of the prototypes was eliminated. The wheels were changed in service to the larger 750 x 125 mm size.
The production PW-9s were shipped to US bases in Hawaii and the Philippines. One PW-9 was fitted at McCook Field with all-metal wings for tests.

In June 1925, before the first of the PW-9s ordered in 1924 had been delivered, the USAAS decided to have the 30th and last PW-9 aircraft (Ser No 25-324) modified during production to test the high-altitude performance of the 510 hp Packard 1A-1500 turbosupercharged engine. The modification was considered important enough to warrant a designation change to XP-4 in accordance with the new system which had been adopted in May of 1924.

Even though the production version of the third Curtiss XPW-8, which had been modified as XPW-8B with tapered wings and a tunnel radiator, was built as P-1 under the new P-for-pursuit designation system, the old PW-designation was retained by the Boeing design all throughout its production run.
The PW-9A was basically similar to the PW-9 but was powered by the later Curtiss D-12C engine (later redesignated V-1150-1). 25 examples were ordered on October 26, 1925. Serials were 26-351/375. The only noticeable outward change was that the landing wires were doubled. The first delivery took place on June 19, 1926.
PW-9A Ser No 26-374 was converted to AT-3 (Boeing Model 68), an experimental single-seat advanced trainer powered by a 180 hp war- surplus Wright-Hispano Model E engine. A similar sort of conversion was made by Curtiss when the same type of engine was installed in a Curtiss P-1A airframe, creating the AT-4. The AT-3 was considerably slower than the PW-9A, since the aircraft's weight had not been reduced in proportion to the lesser power. Consequently, the AT-3 trainer was neither as fast nor as maneuverable as it could have been if it had been initially designed for the purpose. Therefore, the Army ordered no production examples of the AT-3. A similar problem was encounterd with the Curtiss AT-4/5 series of single-seat advanced trainers, which led to an Army decision to convert most of them back to P-1 configuration.

PW-9B was the designation given to the last PW-9A (Ser No. 26-375) when it was re-engined with a Curtiss D-12D (V-1150-3) engine. Fifteen production PW-9Bs were to have been built, but their designations were changed to PW-9C because of a change in the military specifications under which they were ordered. 26-375 reverted back to PW-9A configuration with a D-12C engine when it was delivered to the Army in February 1927.

The PW-9C was the production version of the PW-9B with modifications to the fuel supply system, a reinforced structure, and bigger wheels on the undercarriage. Outwardly, the PW-9C was similar to the PW-9A except for rearranged flying and landing wire fittings. It was powered by the D-12D engine of the PW-9B. An initial order for 15 examples was placed on June 19, 1926 (Ser. Nos. 26-443/457), followed by an order for 25 more on August 18, 1926 (Ser. Nos. 27-128/202). The first delivery took place on July 9, 1927. Maximum speed was 163 mph at sea level. Weights were 1936 lb. empty, 3170 lb. gross. Originally, the PW-9C had the small unbalanced rudder of the PW-9A, but that was changed in service (along with the those of the other production models) to the balanced type developed on the experimental Navy FB-3.

The last PW-9C (27-202) was delivered with alterations as the first prototype for the PW-9D. The PW-9D was the final production model. It was powered by the D-12D engine. It had a newly- designed radiator, landing gear with the same size wheels as the first PW-9s, and a set of wheel brakes. An aerodynamically-balanced rudder of increased area first tested on the Navy FB-3 was adopted as standard. This rudder was later retrofitted to most earlier PW-9s, including Cs already in service. Sixteen examples were ordered on August 12, 1927 (Ser Nos 28-026/041), the first delivery being on April 25, 1928. The gross weight of the PW-9D had crawled upward to 3234 lbs, as compared with 2835 lbs for the initial PW-9. Maximum speed was 155 mph at sea level, and an altitude of 5000 feet could be attained in 4 minutes. Service ceiling was 18,230 feet. The last PW-9D (Ser No. 28-041) was experimentally fitted with a new 600-hp Curtiss V-1570-1 Conqueror engine and was redesignated XP-7 under the new system.
The Navy versions of the PW-9 series bore the designation FB-1 through FB-5. They were basically similar to the PW-9, but with various naval equipment such as tailhooks, reinforced fuselages, and beefed-up undercarriages.

Effects -
-On startup there is automatic engine smoke.
-Then follow the exhaust flames with smoke.
-Continuous blue flames with smoke if engine is running .
-Guns with flash, smoke and falling cartridges can be triggered with the standard Strobe key (O).
It is much nicer however if you put the FS2004 standard Strobe key (O) to the trigger from your joystick. You can change this in the Key menu.
It is a good idea if you replace the standard (L) key for lights by the L+CTRL, (normaly activating the landing lights only). This avoids you having to have all lights on when pulling the trigger.

-Read instructions carefully when installing the gauges , say YES...when asked if the gauges sources should be trusted. If you say no....most of the gauges are not going to work !

Flying the plane -
Remember...this is an early fighter biplane ! Manoeuvrability is good, it rolls fine and is responsive to rudder and elevator. Nice flying aerobatics close to the tower !
Gather as much speed as possible for a loop. On top of it, you'll be very close to the stall. Wing over, knife edge, segment rolls are all possible.
- Hold up elevator to start the engine, you have no brakes and the tailskid must firmly be on the ground to stop the plane.
- Take off at about 70, correct with left rudder.
- Climb at 75, level at altitude, speed slowly builds up to 140.
- Landing approach at 90, over the fence at 75, touchdown at 65. You need some up trim for a threepointer.
- Hold up elevator for the tailskid to brake the plane when taxying.

Credits -
Special thanks to:
-GMAX for the drawing program and Microsoft for their makmdls.mdk.
-To Corrado La Posta for his advice. 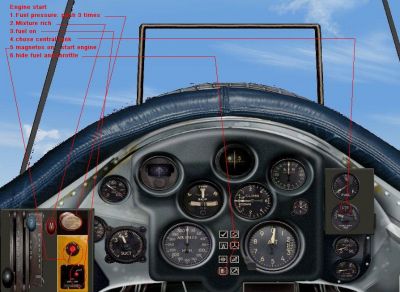 The archive pw-9c.zip has 72 files and directories contained within it.