Hawker Tempest VI, NX142 GN-G from 249 Squadron of the Royal Air Force in 1948 The Tempest Mk VI evolved as a development of the Mk V, with a more powerful 2,340 hp Sabre V engine. This is a FSDS V2 model originall designed for FS2004. It features 2D and virtual cockpit, opening cockpit canopy, moving pilot's head and many other animations as well as lights and automatic special effects. By David Hanvey and Paul Barry. Air file by Jerry Beckwith. Original effects by Jan Rosenberg. Tested for FSX and thumbnail added by Danny Garnier. 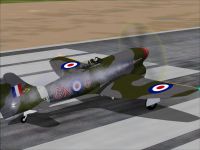 It was based in Iraq, although along with other Middle East squadrons was highly mobile and moved around from place to place. The Tempests were replaced by Vampires in 1950. This package includes a new model. The Tempest Mk VI evolved as a development of the Mk V, with a more powerful 2,340 hp Sabre V engine.

This is a FSDS V2 model for FS2004. It features 2D and virtual cockpit, opening cockpit canopy,moving pilot's head and many other animations as well as lights and automatic special effects. By David Hanvey and Paul Barry. Airfile by Jerry Beckwith. Original effects by Jan Rosenberg.

We (David Hanvey and Paul Barry) have produced this FS2004 Tempest. Jerry Beckwith has kindly produced the airfile. We have also included effects based on those originally created by Jan Rosenberg. The aircraft has been used and tested in FSCOF/FS9/FS2004. We expect it to work in FS2002 also.

For automatic installation, unzip to your main FS2004 directory.

To manually install (PREFERABLE), unzip first to a temporary directory. Then copy the folder Tempest_MkII (found in the Aircraft directory) to your main aircraft directory in FS2004.

Finally, copy and paste the contents of the GAUGES folder into your main FS2004 GAUGES folder. Most of the gauges were originally from CFS2 plus some freeware add-ons. Not sure who provided all the add-ons originally (too many downloads installed/deleted). Although our thanks to Phillipe Burnage for the hawker.gau. Our apologies for not giving specific credit.

If you are asked to overwrite any files then just say no!

Sound is aliased to the stock DC-3 in order to keep this filesize down. If you have already downloaded the Sea Fury T20 of the RNHF (SFRel2.zip), then you may wish to alias the sound to that aircraft instead. Alternatively, you can download the Sea Fury sound file (SFsnd1.zip).

You may have to assign some of these commands in FS2004. You can do this by going to settings and then to controls/assignments in FS2004.

THIS WORK IS FREEWARE. THAT MEANS YOU DON'T HAVE TO PAY ANYTHING FOR IT! NO COMMERCIAL USE IS ALLOWED. NOTHING IN THESE FILES SHOULD HARM YOUR COMPUTER, BUT WE ACCEPT NO LIABILITY. 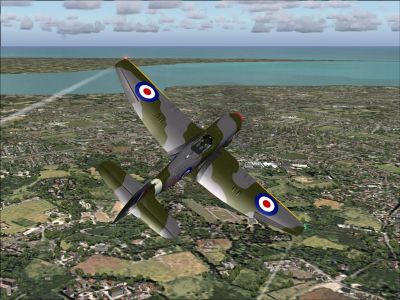 The archive fsxtemp6.zip has 78 files and directories contained within it.