This is Robert Dial's North American P-51 Mustang modified for Flight Simulator X. This aircraft is painted as Captain Donald Bryan's "Little One III" of the 352 Fighter Group, 328th Fighter Squadron. Aircraft Crew Chief Kirk Noyes was awarded the Bronze Star for 110 missions without a mechanical abort. Captain Donald Bryan was credited with 13.300 aerial victories with five in one mission becoming an ace in a day. He retired from the Air Force in November 1964. His received the Distinguished Service Cross, Distinguished Flying Cross with two Oak Leaf Clusters, and the Air Medal with 14 Oak Leaf Clusters. Package includes pictures and history of Little One III. Textures and updates by Mark Rooks of RSDG Aircraft. 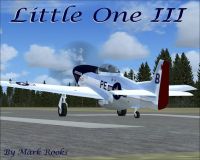 Screenshot of P-51 Little One III on runway.

2.Copy the " Little One III " folder and paste it in the main aircraft folder.

The archive dbloiii.zip has 10 files and directories contained within it.