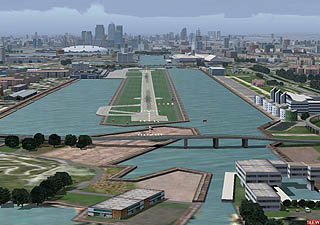 Visual Flight has announced a new version of Visual Flight London is being worked on that will be compatible with the default scenery. Previous versions required add-on UK scenery. When available, the scenery will work with both FS2004 and FS2002. For full details, click on Read More.

Visual Flight have announced a new version of Visual Flight London cityscape and airport scenery which will allow the scenery to be used by all users, not just those who have VFR Terrain or VFR Photographic Scenery as required by the existing version. In order to provide compatibility with the default Microsoft scenery, the new version provides a detailed version of the River Thames, providing the geographically accurate base that the rest of the scenery requires. In addition to changing the course of the river, the new version traces the outline of all docks, marinas and tributaries to fit with the 3D features provided by the rest of the scenery. This is of particular interest at London City Airport where there is a drop of over 2m to the waters of the docks surrounding the runway on all sides.

Visual Flight London contains approx 50 sq miles of detailed, custom designed, individual 3D objects including the top 100 tallest buildings, all major and historic landmarks, all bridges across the Thames, plus a superb rendition of London City Airport and the London Air Ambulance helipad on top of Royal London Hospital. With over 7,500 custom designed 3D objects (not generic autogen) in the scenery, Visual Flight London is a major piece of work far exceeding any other scenery previously available for London, and capturing the look, feel and atmosphere of the capital making its features it instantly recognisable to those who live and work there, as well as to its many visitors and those who pass over it on the flightpath into London Heathrow.

The new version is currently in the late stages of development and testing, and is expected to be available within the next 7-14 days. Users who do not require the additional compatibility features of the new version can purchase the existing version direct from Visual Flight.

More info over at SimShack.