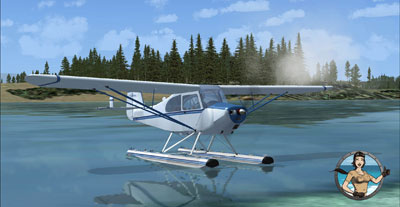 Developed by CR1 Software, this Microsoft Flight Simulator X-compatible simulator add-on is a whopping 420 MB. This incredible package is one of the best on the market. CR-1 developed this add-on specifically for the FSX. It includes terrific textures and is quite detailed, realistic and accurate.

The Aeronca is routinely used to train some of the world’s best pilots and also novices. Cadets often learn to fly using the Aeronca. The plane is also beloved by private pilots. The Aeronca is noted for, amongst other things, its great ability to be easily maneuvered in and out of air strips that aren’t very big. It is also terrific for sight seeing.

Individuals will also find that the Aeronca sim is available in both short and long tail versions of the aforementioned. Players will have the option of choosing from any 5 colors which can be used to mix and match models, interiors and liveries. This makes it possible for persons to create planes to their liking and specifications.

The Aeronca Champion by CR-1 is a great simulator add-on. It was built to specification and will provide users with hours of fun. This plane is one of the most popular and well-regarded in the world. If you are interested in seeing what the fuss is all about, get this add-on. It’s cheap but robust. Its file size is an enormous 420 MB.

View description and screenshots of the Aeronca Champion here.