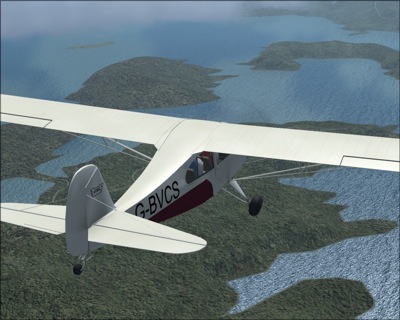 The Aeronca Champion, more commonly known as the Champ, is a single-engine, two-seat, fixed conventional gear airplane. Originally designed for flight training and personal use, it entered production in the United States in 1945.

Built by Aeronca Aircraft Corporation, the Champ first flew in 1944, having been designed in tandem with the 11AC Chief-the Champ with tandem seating and joystick controls, and the Chief with side-by-side seating and yoke controls. The intention was to simplify production and control costs by building a pair of aircraft with a significant number of parts in common; in fact, the two designs share between 70% and 80% of their parts. The tail surfaces, wings, landing gear, and firewall forward-engine, most accessories, and cowling-are common to both airplanes.

Aeronca ceased all production of light aircraft in 1951, and the Champ design was sold in 1954 to Champion Aircraft.

Like the Piper Cub with which it competed, the Champ features tandem seating. While the J-3 model of the Cub is soloed from the rear seat, the Champ can be soloed from the front, giving improved forward visibility on the ground and during takeoffs, landings, and climbs. The Champ has a wider cabin than the Cub and offers better visibility generally.