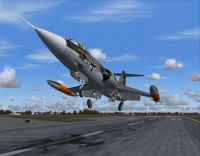 New from Captain Sim is their FS2004 version of the Lockheed F-104 Starfighter single engine jet fighter. The release includes eight models with a total of 15 liveries. For details, click on Read More.

One of the most significant jets of the last century the F-104 "Starfighter" add-on for FS2004 released! 8 models, 15 liveries, Virtual Instructor Pilot, TCE and more.

Captain Sim is ready to add a new high quality model to their lineup of planes compatible with Microsoft Flight Simulator 2004 with the addition of the Lockheed F-104 Starfighter, a single engined supersonic aircraft originally designed for the United States Air Force.

For extra variety are 15 included liveries with sets such as the original United States Air Force, the German Navy, or even the Starfighters display team; with 86 free liveries also available for additional download from the Captain Sim website.

The interior is also designed with a high measure of attention to detail with a highly detailed and functional virtual 3D cockpit included. The interior 2D renderings also feature fully functional instrument sets with hundreds of bitmaps, with most switches being clickable; you can even complete and entire mission from beginning to end entirely with the use of the virtual cockpit.

All of the systems are designed in specification with the F-104 Starfighter manuals, and like all Captain Sim models, it has been tested by pilots and engineers with experience with the real thing. Among the complex instrumentation programmed into the model include MH-97 Autopilot, Tactical Air Navigation System adapted for civil navigational aids operations, PHI navigation system, civil ADF with an old antique but still 100% authentic tuning system, functional and authentic radar, optical sight with a built in ground speed error indicator, radio panels, an annunciator panel, and many other fully functional avionics.

All of this including the Interactive Instructor Pilot voice package, which can help you master the F-104 and also learn to operate it safely, and the Textures and Configurations Editor, which allows you to add and edit new F-104 variants, are all included in the F-104 Starfighter package.

Captain Sim's convenient online store has the model available for purchase now by credit or debit card, or with a secure payment from your PayPal account at their online store at: https://www.captainsim.com/store/.

does it work for FSX and FSX steam edition?