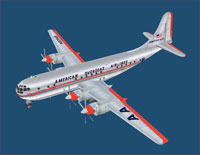 When Boeing developed the B-29 Stratofortress during WW II, it was soon realized that it was the beginning of a new plateau of aircraft technology. The USAAF and Boeing soon realized that an impressive transport aircraft could be developed from the bomber, and the Model 367 (C-97) was flying by the end of the war. The B-29's wings, engines, and tail were mated with a completely new fuselage, whose dimensions at that time looked fantastic. The front looked bluff and unstreamlined, but the maximum speed was calculated to be as high as the bomber's. The plane was tailored to the military's needs, but as the war was winding down, the aircraft manufacturer began to think of ways this new technology could be translated into an airliner derivative.

Pan American was very interested in the plane, but thought that it would be even better equipped with the new Wasp Major engine, then in development for the B-29's successor, the B-50. With the promise of an order from Pan Am, Boeing had refined the Model 377 with the new engines by 1946, with all the latest refinements, including full anti-icing, light alloy structure, and foldable tail. The interior would feature a two-deck arrangement, with luxurious furnishings and a spiral staircase to a downstairs bar/lounge.

In June 1946 Pan American canceled it's DC-7 order (an earlier model quite different from the eventual DC-7) and ordered 20 377's, now named the Stratocruiser. Further orders came from Northwest, American Overseas, SAS, BOAC, and United. The Northwest and United examples were built slightly differently, the most obvious change being the square passenger windows. However, total production of the Stratocruiser only came to 56, with most airlines shying away from the complex Wasp Major engines with their twin General Electric turbos and Hamilton Standard hollow-steel square-tipped props. There were indeed many problems with the "Strat" as it was placed into service, but the competing Connies and DC-6's also had problems that even lead to their temporary grounding. SAS never actually took delivery, their four planes being added to the BOAC order.

The Stratocruiser was typically used in first class transatlantic service (except for the United and Northwest planes), and other international routes. However, they were rapidly replaced by other more economical aircraft in the late 50's and by jets in the early 60's, and were sold to other operators. Many of these were converted to cargo operations, and several were used in the "Guppy" rebuildings, resulting in grossly outsized fuselages for hauling such things as rocket sections and airplane parts. Others became transports for the Israeli air force.

The archive b377aoa4.zip has 29 files and directories contained within it.