File Contents
FS2004/FSX Vought Corsair F4U-1. Big, tough, and fast, the gull-winged Corsair was a formidable fighter against any opposition. It was the first navy fighter to exceed 400 mph in level flight. The Corsair's signature gull wing prevented its immense propeller from chewing up the deck while keeping the landing gear struts short enough not to buckle in rough carrier landings. Original CFS2 model by Dbolt, upgraded to FS2004/FSX by A.F. Scrub. 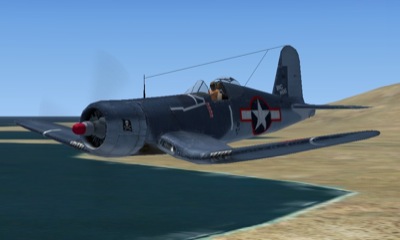 The archive corsair6.zip has 86 files and directories contained within it.

The Vought Corsair is one of those aircraft that, in truth, I know very little about. Therefore, when I see this recreation I simply had to try it out. It’s an aircraft that was well-known for its durability and its strength in the air, as well as being a bit of a powerhouse, so I was interested to see if this reputation was adhered to in this recreation of the aircraft.

A formidable fighting aircraft, I expected something that felt rough and unready – a real slog of a flight that would be hard to truly invest myself in as time went beyond.

However, what I did find was that, contrary to my beliefs, it was a very smooth aircraft to fly around in. after all, it was the first ever Navy fighter to exceed 400mph in a level flight. This was a big deal and as such I could feel why that was the case.

It might feel a little underdeveloped when compared to, say, a MiG, but it’s by no means an obsolete piece of craft. It’s very impressive to fly, with the raw power it holds being harnessed well in an aircraft that is surprisingly comfortable to fly with.

It’s signature Gull wig meant that the massive propellers at the front could stay in place without becoming a flight risk. This is noticeable as you fly, as you can literally feel the aircraft combating its various tensions as they get worse as your flight continues.

It also keeps the landing gear struts short enough to ensure you can make landings on rough terrain without damaging the struts themselves. All the little things that were implemented to such surprise back in the day when this was first released have been faithfully recreated to make this truly feel as it should.

This is the original CF2 model, originally created for FS2004 by A.F. Scrub. I used the original and decided to use this new take as I was so enamored with the original. I have to say that the model has been improved, with changes to the quality of the textures and the model density one of the major upgrades.

It looks better, seems to fly more accurately, and just feels like it should fit in with a modern flight simulator. For that reason, I’d be more than happy to suggest to any flight historians or fan-boys like myself to try this out – you won’t be let down!

Seems extremely nose-heavy! By the way, you must read the instructions to get the instrument panel.