Airblue Airbus A319-112, registration AP-BIF. Virtual Airblue in association with Virtual PIA proudly presents the Project Airbus A319-112 in Airblue colors for FSX. Airblue is a Pakistan based LCC that operates throughout the Middle East and to Europe, besides several domestic operations. This a...

Airblue Airbus A319-112, registration AP-BIF. Virtual Airblue in association with Virtual PIA proudly presents the Project Airbus A319-112 in Airblue colors for FSX. Airblue is a Pakistan based LCC that operates throughout the Middle East and to Europe, besides several domestic operations. This aircraft, previously operated by Skybus (USA) was acquired by Airblue after the former airline went bust. This aircraft wears the registration AP-BIF. The repaint features accurately placed titles and photoreal tail texture adopted from a photograph. The registration appears on top of the right wing and the bottom of the left wing, and an Airblue logo appears on the top of the left wing and the bottom of the right one. The Pakistani flag is placed next to the doors as well. This FSX model by Project Airbus features accurate dynamics plus four opening passenger doors and two cargo doors. Repaint by Ahmed Ahsen from Virtual PIA (VPIA) and Virtual Airblue.

For more information about the aircraft , see PA_Readme.txt or PA_Readme.pdf

Here say Thank You to Project Airbus Team for the outstanding aircraft ! 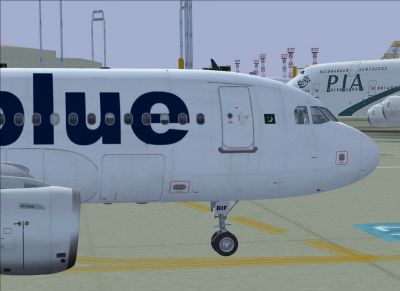 The archive ap319xbif.zip has 51 files and directories contained within it.