Island Tours Cirrus. A repaint of Wolfram Beckert, Guenter Kraemer and Thomas Roehl's Cirrus Aircraft, modified for Flight Simulator X. The SR20 and SR22 are constructed with composite construction and advanced aerodynamics. This design was awarded FAA Type Certification in 1998 with a final level of protection known as the Cirrus Airframe Parachute System (tm) (CAPS). This aircraft is painted in a fictional Air Charter service called "Island Tours", Operated from the Isle of Palms S.C. Aircraft package includes pictures of the Isle of Palms from the air. This aircraft has a working Cirrus Airframe Parachute System. Textures and updates by Mark Rooks of RSDG. 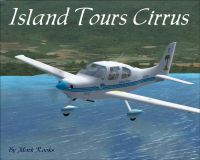 2.Copy the " Cirrus Island Tours " folder and paste it in the main aircraft folder.

Enjoy your new repaint
Thanks for downloading

The archive iopit.zip has 7 files and directories contained within it.