Classic Cessna 195. A repaint of Mike Stone's Cessna 195 modified For Flight Simulator X. This aircraft is painted in a traditional yellow and white scheme. The Cessna 195 is one of the finest classics ever built. With all metal construction, roomy interior, radial engine, and beautiful lines, it...

Classic Cessna 195. A repaint of Mike Stone's Cessna 195 modified For Flight Simulator X. This aircraft is painted in a traditional yellow and white scheme. The Cessna 195 is one of the finest classics ever built. With all metal construction, roomy interior, radial engine, and beautiful lines, it is already in an elite class. When one considers its useful load, low fuel consumption and relatively high cruising speed, it's really in a class of its own. This package includes pictures of actual C195's and the production history. New panel, textures and updates by Mark Rooks of RSDG Aircraft. 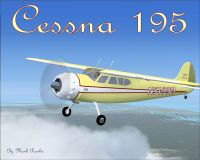 " Cessna 195 " Support Mercy Flight near you

2.Copy the " Cessna 195 " folder and paste it in the main aircraft folder.

The archive cc195fsx.zip has 7 files and directories contained within it.