Red Bird Cessna 195. A repaint of Mike Stone's Cessna 195 modified for Flight Simulator X. The Cessna 195 is one of the finest classics ever built. With all metal construction, roomy interior, radial engine, and beautiful lines, it is already in an elite class. This aircraft is painted in a rich ...

Red Bird Cessna 195. A repaint of Mike Stone's Cessna 195 modified for Flight Simulator X. The Cessna 195 is one of the finest classics ever built. With all metal construction, roomy interior, radial engine, and beautiful lines, it is already in an elite class. This aircraft is painted in a rich red and yellow texture with dynamic shine accented with a big bold chrome engine cowl. Chrome textures created with the use of a unique light bending process. Updated panel, flight dynamics and new textures for FSX by Mark Rooks of RSDG Aircraft. 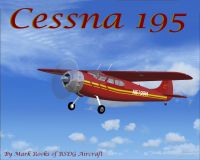 2.Copy the " Red Bird Cessna 195 " folder and paste it in the main aircraft folder.

(Airborne Version)
And the Lord God spoke forth unto the heavens and said "Let there be Airborne". The earth did tremble and quake, and the waters did rise up. The clouds did part, and there came forth a multitude of parachutes which filled the sky. God looked down and saw that this was good. And they were good, for they were AIRBORNE!!

The archive rbc195x.zip has 7 files and directories contained within it.