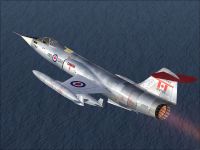 F-104G Starfighter in the colors of CAF "Cold Lake" You must own a legal copy of the Alphasim F-104G to use this files. Repaint by Henry William [textures only]

B) Copy and paste the texture.cold in the folder where you have the ALPHASIM F-104 Starfighter 2. In my computer the location is this:

c)Open the aircraft.cfg file and paste the following after the last number in your entry. Where you se an XX, reemplace this with a number as said after the previous number:

[fltsim.xx]
title=ALPHA F-104 Starfighter Cold Lake
sim=f104_2
model=tanks2
panel=
sound=
texture=cold
kb_checklists=f104_check
kb_reference=f104_ref
atc_id=2412
ui_manufacturer=Lockheed
ui_type=F-104G Starfighter
ui_variation=CAF Cold Lake 744
ui_typerole="Interceptor"
ui_createdby="AlphaSim Ltd"
description=© AlphaSim 2007\n\nLockheed's F-104 Starfighter was sleek, sexy, and difficult to fly. Essentially a J-79 turbojet with tiny wings and a place for the pilot to sit, it had a poor turning radius and very unpredictable behaviour at high angles of attack along with very high takeoff and landing speeds. Yet, with modifications such as blown flaps and a stick shaker that pushed the nose down in a stall, the plane proved quite capable. Its strength was never in its agility, but rather in its speed. The type was the only aircraft in existence at the time that could sustain speeds of over Mach 2.0, and it had a stellar rate of climb. A good airplane, it sold well to foreign forces after being phased out of active USAF service in 1967. The Starfighter was an icon among jet interceptors throughout the 1970s, serving in large numbers in the US Air National Guard as well as with the German, Italian, and Canadian air forces. The last Italian Starfighters were retired from active service in 2004.
atc_id_color=0x00000000
atc_parking_types=MIL_COMBAT
atc_heavy=0
atc_id_font=Verdana,-11,1,600,0
visual_damage=0
atc_airline=AIR FORCE
atc_flight_number=8244 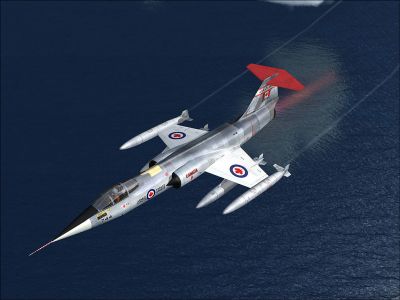 The archive sf_cold.zip has 21 files and directories contained within it.

Hi Jim, I had the same problem, but after a couple of hours of investigation, I found the solution. The path specified in the "texture.cfg" file (inside of "texture.cold") is wrong for your file configuration.

Has their been any release of a texture fix for this repaint by Henry...?? Blacked out Canopy as well as surrounds and Pilot within it's 3D Cockpit. Gauges OK. Bought Virtavia's F-104G specifically for this CAF version Repaint... but it fails to render properly when loaded into FSX - Acceleration Sim. Some on forums have said it's an "FS9 conversion to FSX" texture issue... ?? Hope there's an updated version of this Repaint to resolve the above... Hope to hear back Regards Jim Christchurch NZ