Lockheed Neptune. Originally an AI aircraft by Jaap de Baare, upgraded for FS2004 by Bob Chicilo (AI_NEPUP.ZIP). This version adds a virtual 2D cockpit adapted to FSX and a Spanish S. A. R. texture (unreal). This is the whole aircraft. By Juan F. Tomas. 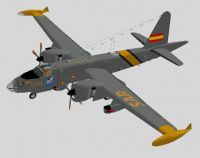 This is an update for FS9 of the AI Lockheed Neptune by Jaap de Baare. He has supplied me with a model file for it that has the jet engines uncovered. I have made it flyable and updated the flight dynamics, added a panel, and added smoke for the jets. This is the whole aircraft. No virtual cockpit.

This update was started at the request of Jim Welch, so you can thank him for it as well as Jaap de Baare for the updated model file.

The sound is aliased to the DC-3. Feel free to use any sounds you like.

The archive lockheed_neptunefsx.zip has 200 files and directories contained within it.