Combat Lancer V2 F-111 Pig HUD Project. A repaint representing the first operational use of an F-111 in a war zone. Six were dispatched to Vietnam in 1968. Version 2 is a vast improvement over the original release. Sand darkened with slight hint of brown, second green darkened to improve camo eff...

Combat Lancer V2 F-111 Pig HUD Project. A repaint representing the first operational use of an F-111 in a war zone. Six were dispatched to Vietnam in 1968. Version 2 is a vast improvement over the original release. Sand darkened with slight hint of brown, second green darkened to improve camo effect. Panel lines under wings reinstated. Panel lines front fuse toned down, forward antennas improved, plus signage enhanced and very many minor improvements overall. Texture title same as original, replacement is simple copy and paste if previously installed. Must have either Alphasim or Virtavia F-111 Aardvark already installed. Specifically made for use with F-111 PIG HUD panel package files FXPIGGB5.ZIP and FXPIGGB7.ZIP. By Karol Chlebowski. 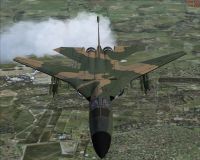 1. This package includes a repaints of the F-111 . Covering the 6 aircraft sent to Vietnam in 1968, this is the third F-111 that was lost in that theatre of operations. The F-111 originally had a white belly paint , this was changed to drab olive for the Combat Lancer aircraft , latter Camo aircraft had black , while the aircraft finally went to Gunship grey all over.

If preceeding descriptions are other than "ALPHA" , then this line MUST be CHANGED accordingly. ( instead of ALPHA it might need to be VIRTAVIA )

2. The aircraft is :
ALPHASIM ( now Virtavia ) F-111 Aardvark .
You will note it is for FS2004 , however with a FSX compatible instrument panel it works magnificently in FSX and in my opinion has probably the best flight model and performance and behavior of any aircraft I have flown in FSX .
Definitely the fastest , SR 71 excluded .
It really is superb .

(A) A superb panel by Steve Hess which accurately represents the actual analogue type panel that was fitted to the F-111 . Very worthwhile having .

(B) A panel created by myself (fxpiggb5.zip ), that is a modern style with digital displays , comprising multiple MFDs , Ground mapping and intercept radar and HUD , complete with multiple effects .
This particular panel has been upgraded by Upgrade 7 available as file fxpiggb7.zip .
The F-111 underwent several panel upgrades , notably ,Mk II avionics (F-111D) , AMP , Pacer strike and AUP , therefore it is not unrealistic that further upgrades would have fully digitalised it, complete with a full implementation HUD , and that is what I tried to emulate with my advanced capability panel that provides the pilot with the all important situational awareness.

Additionally my panel creates a second and separately named F-111 , and thereby allows for two aircraft with differing panels , the original style and the modern style , hence you get the best of both worlds . 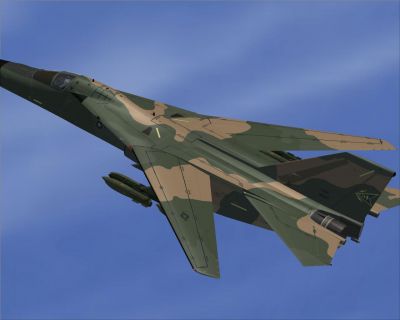 The archive combatlv2.zip has 38 files and directories contained within it. 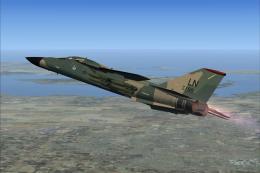 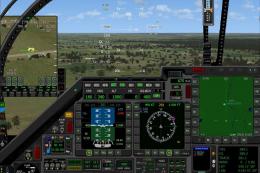 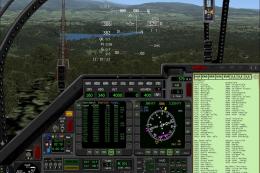 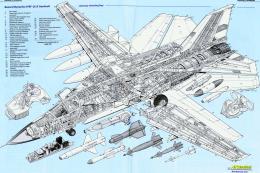 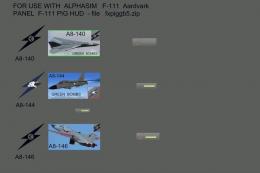 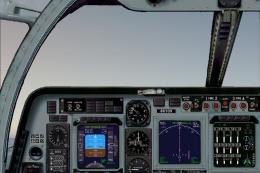 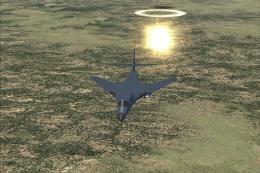 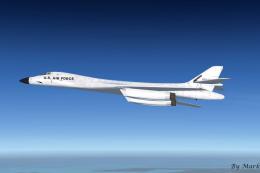 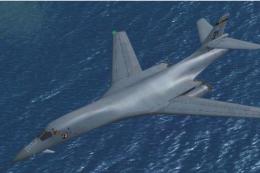