French Army H-21C (ALAT) GH2 Setif 1959. A repaint of Mick Posch's H-21C (PIASH21C.ZIP) with specially modified .MDL files thanks to the author. Aircraft is seen here devoid of national markings, although some machines wearing this scheme with fin serial and code letters did have upper and lower fuselage roundel. It sports the unit badge behind the cabin door and the GH2 logo on the rear starboard fuselage side. Repaint by Michel Gerard.

ui_typerole="Rotorcraft"
ui_createdby="Mick Posch"
description=Aircraft is seen here devoid of national markings, although some machines wearing this scheme with fin serial and code letters did have upper and lower fuselage roundel. It sports the unit badge behind the cabin door and the GH2 logo on the rear starboard fuselage side. Repaint by Michel Gérard. 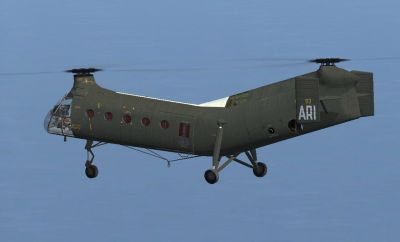 The archive h21_ari.zip has 19 files and directories contained within it.