French Army Vertol V-42B (ALAT) 1956. A repaint of Mick Posch's H-21C (PIASH21C.ZIP) with specially modified .MDL files thanks to the author. It depicts one of the two Vertol Model V-42B the French Army received in 1956 (C/N 329, French Serial FR31). This repaint can be regarded as fictitious since the civilian V-42B differed in some significant respects from the military H-21C (size and number of the windows, cabin door arrangement, etc.). Repaint by Michel Gerard.

ui_typerole="Rotorcraft"
ui_createdby="Mick Posch"
description=This is one of the two Vertol Model V-42B the French Army received in 1956 (C/N 329, French Serial FR31). This repaint can be regarded as fictitious since the civilian V-42B differed in some significant respects from the military H-21C (size and number of the windows, cabin door arrangement, etc...). Nevertheless I found the paint scheme original enough, and I hope you will enjoy it. Repaint by Michel Gérard. 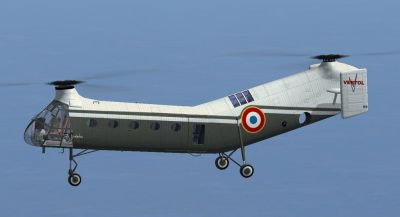 The archive h21_fr31.zip has 20 files and directories contained within it.