H-21C French Army (ALAT) GH2 Setif 1956. This is a repaint of Mick Posch's H-21C (H-21C_RE.ZIP) with specially modified .MDL files thanks to the author. This machine is one of the first fourteen delivered to the French Army in 1956; it still sports the original C/N 159 on the fins instead of its French serial number (FR12). Large fuselage roundel and two-letter code are characteristic of this early paint scheme. Repaint by Michel Gerard.

ui_typerole="Rotorcraft"
ui_createdby="Mick Posch"
description=This aircraft is one of the first fourteen delivered to the French Army in 1956; it still sports the original C/N 159 on the fins instead of its French serial number (FR12). Large fuselage roundel and two-letter code are characteristic of this early paint scheme. Repaint by Michel Gérard. 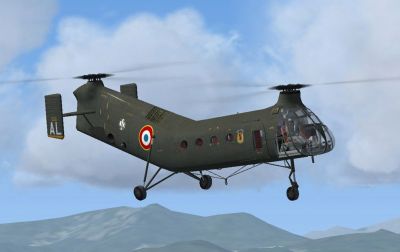 The archive h21_al.zip has 19 files and directories contained within it.