HMS Drake. A heavy cruiser in the Royal Navy which served as a convoy escort during WW1. This Gmax model was based on a drawing obtained from the National Maritime Museum in London. By John MacKay.

The heavy cruiser HMS Drake served the British Royal Navy during WW1 as a convoy escort. On 2 October, 1917 she was torpedoed by U-79 off the north coast of Ireland and later sank after reaching Rathlin Sound.

This medium detail model was built using a copy of original plans that were obtained from the National Maritime Museum in London.

This model was built in gmax. Copies of the source files can be obtained from TurboSquid. These files are also available in 3ds and obj file format.

INSTALLATION:
This model is for use in Microsoft's Flight Simulator X.
Unzip the files into a temporary directory. Place the various files in the different directories based on which folder they are found in. For example: Take the folder that is located in the folder titled "Place in SimObjects_Boats folder" and place it in the "Boats" folder that is located inside the "SimObjects" folder.

Operations:
Player controlled HMS Drake.
Key commands:
"I" key = smoke and bow wake on and off. Engine needs to be running for smoke effect to appear.
"z+z" = sounds ship horn. Heard in cockpit or VC only.
"g" = toggles bugle calls for general quarters and secure. Heard in cockpit or VC only.
spoiler key or "/" - drop anchor animation. Total length of animation is 45 seconds.
"shift+E" open/closes bridge wing doors
"shift+E+2" opens/closes doors to access platform at rear of bridge.
"shift+2" opens fire control panel. For the best looking effect, press the aim button for the desired salvo first, then press the fire button. Pressing on the fire button a second time will reset the salvo fire effect.

Pressing the "L" key will fire all three different cannon salvos at the same time. The navigation lights should be turned on and off using the light switch that is available on the 2d cockpit panel.

Note: If the player-controlled HMS Drake is in the FS world with the AI HMS Drake, pressing the "AIM" buttons on the fire control panel will cause the aim animation to play on both models.

TERMS OF USE:
The mesh, mdl and texture files contained in this package are copyrighted © 2010 by John MacKay. These items, or any part of them, may not be copied, reproduced or disassembled in any way, nor published in any way and by any means, without written agreement from John MacKay.

The product is provided 'as is' and the author and distributor do not accept any liability for any damages of any kind resulting from the use of the product in any way.

After downloading this product, HMS_Drake, you may install and use it on ONE computer only for your private use. You are granted a free, non-exclusive right to install and use the HMS_Drake package on a single computer system.

Only modifications to the texture files are permitted to be re-distributed over the internet.

Any video or animation images created by using this model for any purpose are permitted and encouraged. 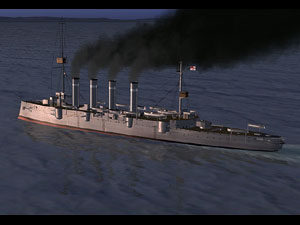 The archive fsx_hms_drake.zip has 79 files and directories contained within it.