Living in Vancouver, I am very prejudiced towards flying in British Columbia and in FS2004 we had many magnificent sceneries in the province. Vern Opperman’s scenery for Castlegar Airport (CYCG) in the West Kootenays, on the banks of the Columbia River, is a beautiful flight from Vancouver or Cranbrook, particularly in a Dash8 or Boeing737.

Imagine my disappointment when this scenery would not work properly in FSX – most of the buildings reproduced okay but some ground polygons were messed up.

For my own use, I have had a try at modifying CYCG to make it work in FSX, quite a lot of work to do this, using SBuilderX to resolve many ground issues and stop the adjacent highway looking like a roller-coaster, and converting an AFCAD file to FSX using ADE, a very intuitive program from “Scruffy Duck”.

The zip file “cycg_FSX”, of which this text is a part, provides the files and instructions to modify Vern Opperman’s FS2004 scenery of Castlegar Airport (cyxc04.zip) to allow it to function in FSX. Vern Opperman has kindly given consent for my uploading of this patch, and he also modified the main bgl file to get rid of a “flying” fence. I have replaced the fences using ADE.

To use this scenery in FSX you need to do the following three steps:

Please do not seek help from Vern Opperman for problems in FSX, this patch is not his work, and I appreciate his approval for allowing me to upload this conversion patch.

And don’t forget the freeware Victoria+ (vicenh7a.zip and vicenh7b.zip) by Don Grovestine, Jon Patch and Holger Sandmann, to round out great flying in southwestern British Columbia in the Victoria area. 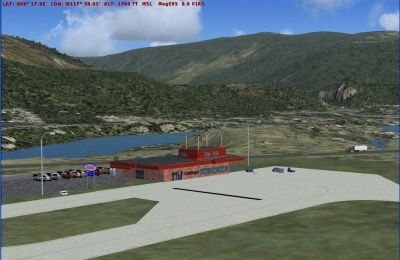 The archive cycg_fsx.zip has 19 files and directories contained within it.