Living in Vancouver, I am very biased towards flying in British Columbia and in FS2004 we had many magnificent sceneries in the province, including John Stinstrom's CYYF Penticton Airport, as modified by Ray Lunning (CYYF4UT.zip). Penticton is a very pretty airport to fly in and out of, sitting on a flat neck of land between two large lakes - Okanagan and Skaha.

For my own use, I have had a try at modifying CYYF to make it work in FSX, using SBuilderX to resolve ground issues, and converting an AFCAD file to FSX using ADE, a very intuitive program from “Scruffy Duck”. I have extended aprons to hide some FSX land class intrusions, and replaced the fences using ADE. I have converted the two traffic bgl’s to FSX format. In addition, in both packages, the aircraft.cfg file in the 0_AI CYYF_B1900 Pacific Coasts folder had a mis-reference to its requisite texture, resulting in a black Pacific Coastal B1900, and this package includes a revised aircraft.cfg.

Also, the Stinstrom/Lunning scenery used “EZ Scenery Creator” – I have activated all its library files into my FSX scenery library, they seem to work okay but have caused a substantial increase in loading times. If anyone knows of any techniques to reduce this increased loading time I would appreciate hearing of them.

The zip file “cyyf_FSX”, of which this text is a part, provides the files and instructions to modify the Stinstrom/Lunning FS2004 scenery of Penticton Airport (cyyf_4ut.zip) to allow it to function in FSX. John Stinstrom and Ray Lunning have kindly given consent for my uploading of this patch. (Please note, I do not know whether these modifications would work in John Stinstrom’s original scenery (cyyf_j2.zip))

To use this scenery in FSX you need to do the following four steps:

Please do not seek help from John Stinstrom or Ray Lunning for problems in FSX, this patch is not their work, and I appreciate their approval for allowing me to upload this conversion patch.

John Stinstrom and Ray Lunning for the original scenery.
Scruffy Duck for his Airport Design Editor program.
Luis Sa for his SBuilderX program. 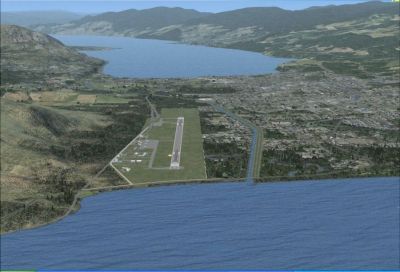 The archive cyyf_fsx.zip has 19 files and directories contained within it.