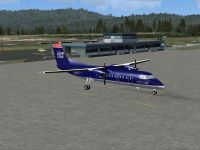 Living in Vancouver, I am very biased towards flying in the Pacific NorthWest, and in FS2004 we had many magnificent sceneries in British Columbia and Washington, including Mark Smith’s KPWT Bremerton National Airport (msskpwt.zip). This scenery collected the FlightSim Developer’s Award in August 2004. Bremerton is a pretty airport to fly in and out of, located on the Olympic Peninsula and close to Seattle.

For my own use, I have had a try at modifying KPWT to make it work in FSX, using SBuilderX to resolve ground issues, and converting an AFCAD file to FSX using ADE, a very intuitive program from “Scruffy Duck”. I have extended aprons to hide some FSX land class intrusions, and replaced the fences using ADE.

The zip file “kpwt_FSX”, of which this text is a part, provides the files and instructions to modify the Mark Smith FS2004 scenery of Bremerton National Airport (msskpwt.zip) at AVSIM, and FlightSim, to allow it to function in FSX.

Unfortunately I have been unable locate Mark Smith to get his permission to upload this patch. However, my patch does not alter any of his files (except that I have created an ADE file from his AFCAD), I am only giving instructions on the removal of certain conflicting files and adding some files of my own. This is also for FSX, whereas his scenery was for FS9. But as a courtesy I would like to have made contact.

To use this scenery in FSX you need to do the following four steps:

1. Remove the ten bgl files from your KPWT scenery folder, as listed in the attached text file – “remove”. I suggest you create a folder called “removals” in this scenery folder and just move the ten files into there.
2. Move the three bgl files in the attached “add_to_sceneryfolder” folder, into the KPWT scenery folder.
3. Move the exclude folder as-is, into your add-on scenery filing system, then activate it inside the FSX scenery library, making sure it is layered above the Bremerton scenery; it excludes a small hanger, picnic table with umbrella, and a fence, which were straddling the main highway in my scenery; if there is no conflict with these objects in your own scenery, there is no need to activate the exclude folder in your FSX library

Sorry but you are on your own with this modification. Please do not contact me for problems in FSX, this was produced for my own use and it does the job for me (I have Ultimate TerrainX and FSGenesis mesh) – however I would like to share my efforts and if it works for you, that’s just great!

Please do not seek help from Mark Smith for problems in FSX, this patch is not his work. If you learn of his whereabouts I would appreciate being informed.

Mark Smith for the original scenery
Scruffy Duck for his Airport Design Editor program.
Luis Sa for his SBuilderX program. 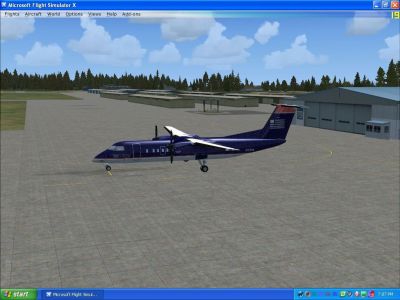 The archive kpwt_fsx.zip has 21 files and directories contained within it.