Seattle Airports, Washington (WA). A revision of the default Seattle-Tacoma (SeaTac), Boeing Field, Renton and Paine Field airports to work with MegaScenery Earth. The artificial plateau that Seatac is built on has been expanded and the third runway added. Runways, taxiways and various structures...

Seattle Airports, Washington (WA). A revision of the default Seattle-Tacoma (SeaTac), Boeing Field, Renton and Paine Field airports to work with MegaScenery Earth. The artificial plateau that Seatac is built on has been expanded and the third runway added. Runways, taxiways and various structures have been revised and/or relocated to match MegaScenery Earth ground textures. Default objects have been used in most cases to minimize FPS impact. MegaScenery Earth Washington-001 (KSEA, KBFI, KRNT) and -002 (KPAE) are required. By Al Wheeler. 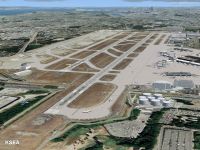 Requirements and/or recommendations for the best display of this scenery.

2) Open Windows Explorer and drag the SEAFSXMS directory into your FSX\ADDON SCENERY directory.

Mesh Terrain:
The mesh slider must be set to 5m because of the complexity of terrain adjustments required around the borders of the artificial plateau that SeaTac is built on. This scenery is useable with default mesh terrain but works better with FSGenesis USA 9.6m Terrain Mesh by Justin Tyme.

KPAE Crosswind Runway and Removal:
I have included an additional AFCAD file for Paine Field. The filename is KPAE_ADEX_AWCX.BGL. This file activates runway 11/29 as a crosswind runway using the technique developed by Jim Vile. To use it put the file in the SEAFSXMS/Scenery directory and remove the KPAE_ADEX_AWNL.BGL file. This procedure will unavoidably bolix up the ATIS runway advisories at PAE but makes all three of the Paine Field runways useable for AI traffic depending on wind conditions. Although I think that PAE is the most interesting of the 4 airports in this scenery, if you don't have MSE Washington-002 that covers Paine Field you could remove that portion of this scenery. To do that just remove the 7 files in the SEAFSXMS/Scenery directory that have PAE or KPAE included in their filenames.


AFCAD Files:
The AFCAD files (XXXX_AFX_AW.BGL or XXXX_ADEX_AWXX.BGL) that contain airport data are used also for many ground textures, markings, exclusions, etc. in and around the 4 airports. Overriding, removal and/or modifications of those files could make an interesting mess of this scenery so do so at your own risk. Also, only one AFCAD file for a given airport can be active. If you have others, be sure to render them inactive when using the SEAFSXMS scenery.

AI Flight Plans:
I made AI flight plans consisting of 77 AI flights originating at the 4 airports covered by this scenery. There are departures beginning at 00:00Z and repeating every 2 hours throughout each day and night. All flight plans utilize only default A/C to keep them universally useable. I made these mainly for testing purposes since there was minimal AI traffic at some of the airports and they don't necessarily reflect normal traffic types. Active Level percentages are set to 10% for 1/2 of the departures, 15% for full departures and 20% for full departures with some T&G's. These flight plans are contained in the Traffic_KSEA_MS.BGL file in the SEAFSXMS/Scenery directory and can be modified or removed if you like. 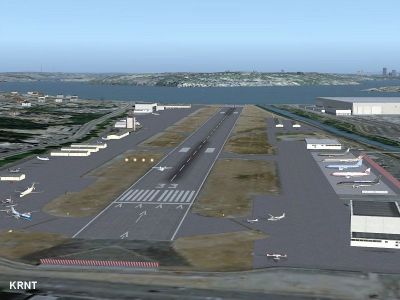 The archive seafsxms.zip has 64 files and directories contained within it.

How do you install this for P3D?

The ground at KSEA is the same city texture used outside the airport. It makes trying to land at the airport rather confusing.