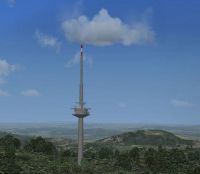 Kassel Calden is a regional airport in the heart of Germany, a few kilometers north of Kassel (the city of the "documenta" modern art exhibition and the town where the brothers Grimm spent many years of their lives compiling their fairy tales). It is mainly being used by private pilots and business jets. A number of companies have their sites at or near the airport. There are also two flight schools, one of them for ultra-lights.

Calden Airport was opened in 1970, at that time replacing an older Airport in the south of Kassel (Waldau). Its runway is 1500 m long, which is to short for larger jets, one of the reasons, why the decision was made to build a larger airport on a site nearby. This project has started in 2010. The decision to build the new airport and its usefulness has been discussed controversely in the public.

The scenery I designed shows the "old" airport as it appeared early in 2010.

Earlier or later times upon request

For more information please visit their Web site. You may also find maps, regulations for landig and take off a.s.o.

This scenery replaces the default buildings by custom made Gmax models and generic buildings. South-western and central buildings from the Ultra-light flight school up to Piper's "General Representation" are custom made (file Calden_Airport.bgl), whereas buildings north-east of these are generic (file Calden-generic.bgl).

Most textures of the first group are made from photos taken during several visits on the site. Time permitting some of the generic buildings will be replaced by custom made ones in a future version.

This scenery also places some windfarms and the "Essigberg" Radio & TV Tower (186 m height - the highest of it's kind in Germany) in the area surrounding the airport. Please refer to the simple basemap for directions and relative distances.

Generic wind turbines are used for the wind farms and a GMax model has been build for the tower. No night textures are included for any of the custom made buildings.

No effects are added to any of the building.

Exclude files for the default scenery are included. A separate exclude file exists for owners of the "German Landmarks" scenery by CR Software. It is placed in the "optional" folder (please see below under "3. Installation").

The scenery should work with the FSX default scenery. It has not been tested with previous versions of FS or with add-ons other than the one mentioned.

If you have downloaded my previous Calden Scenery please delete it, as this one uses a different file structure and is not compatible with the previous version.

Extract the archive to a temporary directory of your choice. Ensure, that the directory structure is kept intact. This will create a subdirectory called "Calden", with the "scenery", "texture" and "optional" sub-directories below.

If you do not like the generic buildings, you may move the file Calden-generic.bgl to the "optional" directory or rename the extension BGL to something else like Calden-generic.bak. The North-Eastern part of the airport will then stay empty.

If you have the "German Landmarks" Scenery by CR Software installed and activated, you need to copy the Essigberg_Excl.bgl from the "...\Calden\optional" sub-directory to "...\Calden\scenery". This removes their model of the Essigberg TV Tower.

I would like to thank Mrs. N. Zemmin from Flughafen GmbH for letting me take all the photos and organizing somebody to accompany me while I was walking around on the airfield.

Google Earth and windprojects were used to locate the windparks. Thanks to Cube Engineering GmbH (Kassel) and energie-online (their subsidiary) for their assistence.

The cement4.bmp file stems from the FSX main texture directory. The same holds for the road1.bmp. Whether it is an original Microsoft file or has been copied there by one of the add-ons I use, I am not able to say. It is certainly not my work. The cement4_1 & _2.bmp are my modifications of the original.

I tried to document the objects and textures I borrowed from other authors. Should I have forgotten somebody, I apologize. With lots of addons it is difficult to keep an overview. It would be nice if the respective author would let me know, what he wants me to do. 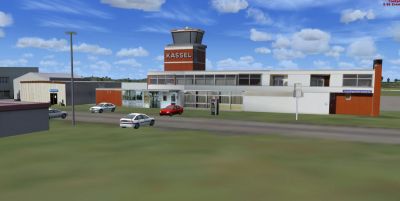 The archive calden2.zip has 62 files and directories contained within it.