Canada Day Fireworks Project. Make sure to read the readme to see where the fireworks are placed throughout Canada for July 1, with much emphasis on British Columbia and some on Ontario.

Canada Day Fireworks Project. Make sure to read the readme to see where the fireworks are placed throughout Canada for July 1, with much emphasis on British Columbia and some on Ontario.

HOW TO INSTALL: Just drop the BGL into the Addon Scenery\Scenery folder of your FSX. Only the BGL file will activate the fireworks.

These should work in ORBX, most are placed in bodies of water but some are in neighborhoods so no guarantees. It's just I don't use ORBX since I like photoscenery for my Washington State since then I can fly over landmarks I recognize like city halls, home, historic downtowns, home, suspected drug dealers and home. Just want to do something nice for Canada once in a while... :-).

Also you can delete the JPGs - they're just previews for the discriminating freeware downloader.

REFERENCE FILE: I decided for those who may have trouble finding the fireworks displays to include the XML source file w/ the GPS coordinates rendered from research & Google Earth.

FIREWORKS LOCATIONS: First, apologies for the use of miles instead of kilometers below. But again I am an American trying to be nice. Enuf said.

I picked these communities by either being a provincial or territorial capital or a major city. I am very partial to British Columbia - hence fireworks in Victoria, Vancouver & so many other cities as per below. I skipped Quebec because there are FSX files for Montreal & Quebec City, plus I don't know if they really celebrate Canada Day. If you have a request for a Canadian city.

Canada Day Fireworks are in the following by order of placement in the XML file:

Victoria, BC - in front of the BC Legislature in the harbor several miles south of the international airport right @ the seaplane airport (Free advice: Victoria+ would be a good freeware idea).

Vancouver, BC - 2 places - west of the Lion's Gate bridge & in the harbor both of which several miles north of the International Airport. BOTH go off at 10:30 until 10:55 PM. (Free advice: Buying Vancouver+ would make this better).

Whitehorse, Yukon - just south of a park and east of the airport on the river.

Yellowknife, NWT - East of the town in the river.

Iqaluit, Nunavut - just south of the town & runway (Free advice: Not a good time to try using the airport unless in a VTOL aircraft or helicopter!)

St. John's, Newfoundland - just south-southeast of the airport in the city's bay.

Halifax, Nova Scotia - 15 miles almost due south of Halifax-Stanfield in the center of town, 4 miles west by northwest of Halifax-Shearwater (now a heliport).

Charlettetown, PEI - 3.5 miles south of the airport, shouldn't miss it.

Saint John, New Brunswick - About 10 miles west-southwest of the aiport in the harbor.

Ottawa, Ontario - Just to the north of the Canadian Parliament.

Toronto, Ontario - A special case. I used a list of Toronto Canada Day firework sites from About.com, then ran them thru Google Earth and just put 1 barge in for most of the events. One fireworks barge goes off at 9:45 at Asbridge's Bay park until 10:45. Another is just west of Toronto Downsview from 10 to 10:45 PM. (Free advice: 10:15 to 10:55 NOT a good time to land on runway 08 or take off from runway 26 from Toronto Island/Toronto City Centre Airport/Billy Bishop Toronto City Airport/CYTZ due to the Ontario Place fireworks you'd have to fly through.)

Hamilton, Ontario - Standard time, about 7.5 miles north by northwest of the airport on the south side of the inlet.

Windsor, Ontario - Standard time, three barges, just west of Windsor International & upstream of the Ambassador Bridge on the Detroit River. I just decided to make it Canada Day instead of every Monday of Canada Day week since FSX can't handle picking Mondays and only Mondays to shoot off fireworks. Put differently to shoot off fireworks: You have to pick a date on the calendar.

Thunder Bay, Ontario - 11 until 11:30 (it's their idea not mine), on the waterfront 7 miles northeast of the airport.

Regina, Sasketchewan - 1 site from 10:30 until 11 2 miles east of the airport in the lake in front of the Provincial Parliament.

Calgary, Alberta - 1 site from 10:45 until 11 at Olympic Plaza. 4 miles south of the International Airport.

Edmonton, Alberta - 1 site from 11 until 11:30 3 miles south of Edmonton Muincipal or 15.69 miles north of Edmonton International.

Kelowna, BC - 7 miles southwest of the airport.

Kamloops, BC - 4 miles east by southeast of the airport.

Surrey, BC - Standard time 12.79 miles east of Boundary Bay Airport which just had a great freeware release. Also 6.86 miles south of Pitt Meadows - a special airport of Vancouver+. Another special airport of Vancouver+ - namely Langley - is a good idea to just fly west from to find the fireworks. As you will notice, when fireworks are shot from muincipalities w/o photoscenery in FSX it's rather problematic. 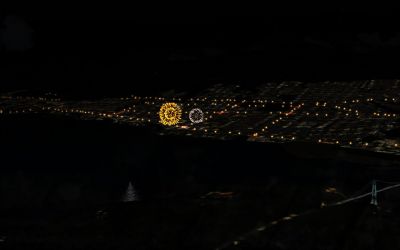 The archive canadadayfireworks.zip has 22 files and directories contained within it.