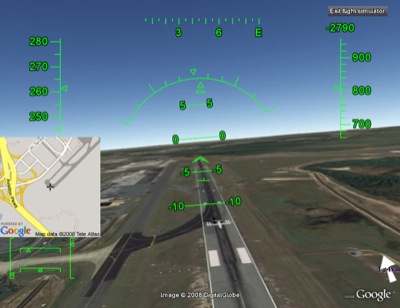 Here are the instructions to get to this exciting feature:

To start with, you must have the latest version of Google Earth installed in your computer. If you have already been using Google Earth, you can check for the latest updates and make your software up to date with the latest release.

Once you have the latest version start the Google Earth application. Start the application and make sure that you are in the Earth Mode and not in the Sky Mode. After switching to the Earth Mode, you must press the following buttons CTRL+ALT+A. In case you have OS X, you must press the following keys – Command+Option+A. If CTRL+ALT+A does not work for you try pressing CTRL+Windows+A. For some people the second combination seemed to have worked. You just need to try both to see what works for you. When the right combination works, you will get a pop up dialog box. Make sure that your pop-up blocker is off.

Carefully review the pop up dialog box. You will see two aircraft options for you to choose initially. You can find F16 and SR22. You must choose one from these two options. Some people like F16 while others SR22. You can try both to see what you prefer. But to start with now, choose one of the options. After selecting the flight, you need to pick the start position. By default, Kathmandu Runway will be chosen. Review the options closely and choose one of the start positions. You can always come back and change your preferences.

It is highly recommended here at this stage that you start learning the controls. You must first master them. Do not frustrate yourself by trying random keys. You are all set once you have learnt the right keys.

Now, to actually work with your flight simulator, here are the instructions. You will be able to get a quick start by pressing the Page Up key for a few seconds. This will increase your thrust to the maximum value. You will be able to find the thrust meter on the lower-left. After reaching the required velocity, you can make use of the directional keys or arrow keys to take-off your flight. After taking off, you must reach to an altitude from where you can stabilize your aircraft. If you are initially unable to control the aircraft as per your liking do not worry, with little practice you will be able to master it. You may find the keys very sensitive in the beginning. Not only Google earth flight simulator has this problem but virtually the keys are very sensitive in almost all the flight simulators. After mastering the keys you can start enjoying the aerial views of all your favorite places. You will be able to capture beautiful shots when you are enjoying your views. You can a nice shot of Himalayas or nice shots of the Liberty statue. However do not expect too much out of the shots you capture.

Though it Google Earth has done a good job with their first release of the flight simulator, things could have been better. One of the things flight simulation enthusiasts would love to have is more views of their aircraft. But with Google Earth flight simulator, the aircraft view is pretty basic. A good view of the cockpit would have certainly been in place. This would present a vivid image of the cockpit with all the controls. This will certainly help those who are trying flight simulators for the first time. You will be able to control the aircraft with joysticks as well. You will be able to make use of your mouse too and switch between mouse and keyboard controls anytime you like.

In case if you are having problems in entering into flight simulator mode you can make use of the following instructions.

If you are using Windows download FlightSim.reg. After downloading it you can double click on the icon and restart your Google Earth application.

If you are using Linux use the following:
echo 1> .googleearth/Registry/google/googleearthplus/User/flightsim/isenabled