One of the most important aspects of using a flight simulator is, of course, that it actually works properly. This can be a source of great frustration for many users as early releases of flight simulators have been filled with errors and bugs that have hampered either the ability to play the simulation out effectively, or even use the simulator in the first place.

From the very first Microsoft Flight Simulator releases to the latest and most modern editions, bugs and errors have been commonplace for longer than you might have ever considered in the past.

Thankfully, with the excellent Dovetail Games working as the head lead on the Flight Simulator X: Steam Edition version, you can rely on regular updates and changes to how the simulator itself actually works. The changes are automatically applied, meaning that you will be able to benefit from a spree of changes without having to even do anything.

Because it’s released on Steam, the popular gaming platform, you’ll automatically receive the updates when you log in or when you try and launch the software itself. This means that anyone who is sick of the small problems and bugs that ported over with the initial release of the Steam Edition can find some quick and easy relief to these issues before they become a long-term issue.

This has been promised as the first of many updates to come, and is mainly built on both staff error findings as well as feedback from the FSX community. The changes that have been made to how the system runs are fairly comprehensive, and can be a solid solution for anyone who is struggling to get the Steam Edition of FSX to launch properly. Take away those frustrating and improve your flight potential with;

Behind The Scenes Changes

Some of the biggest changes to the software have been the changes “under the hood” so to speak. This has been anything from issues to connecting online to how the game actually deals with and handles errors. Many small fixes & changes have been made to give you a much greater understanding of what is going on behind the scenes so that you can get easier help & troubleshooting advice when errors do still actually occur.

As one of the biggest improvements to FSX: Steam Edition, the multiplayer networking system has been a big disappointment for many people. This isn’t because of a lack of features – but functionality. Many people suffered from regular crashing and bugs occurring when their Steam client was reading the host of the servers tag data.

This could cause significant problems and, in many cases, stopped users from being able to play their edition online altogether. These changes have been corrected with significant improvements made to the way that the software actually reads and represents Steam host data details.

One main issue that many people had was that the HIGHMEMFIX option was usually enabled by default on installation, and was very rarely possible to disable during the actual simulator being on. This could be an issue in that it can impact performance on some machines, and now the ability to enable and disable the setting has been made easy to access for everyone.

One of the most important things about being able to make error logs and give feedback to Dovetail Games is the error reporting system within FSX: Steam Edition. This lets you log errors with the company easily, but many of the error messages within the game provided vague context and codes. Now, you get a clear error message that will tell you if, for example, the software has failed to load the .dll file ‘Language.dll’. This shows you the name of the .dll that has failed to load, so that you can get an easy to use solution. 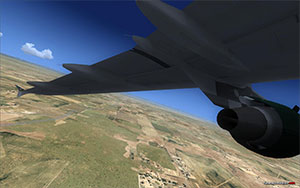 The Learning Centre is where all new pilots will start off to get a better idea of what they actually are dealing with – the problem is that for many people, the learning center was bugged and broken. Many problems existed within this part of the simulator which made getting better and learning the smaller sections of FSX much harder to actually deal with. These small changes helped to fully ratify these problems.

The Learning Center suffered from one of the most prominent bugs within FSX: Steam Edition – and that was an error to load the mission that you wished to attempt within the Learning Centre. This update will correct these scripting errors, ensuring that the game can locate the scripts for each Learning Center mission and that you can load every mission whenever you wish. These updates to the coding make every tutorial mission that is available for you easy to get access to now.

As the simulator has now moved from the traditional GameSpy libraries to the more high-end Steam servers, many small changes were made to FSX to accommodate this shift. However, old GameSpy logos remained with the simulator and had to be removed – this patch helps to remove any old traces of the GameSpy section of the game, limiting confusion and guaranteeing that you know exactly what version you are actually running. This can be useful for those who found the mixed licensing a bit confusing, given the swap from the GameSpy servers to the Steam servers in production.

Many graphical changes were brought into force as well, to improve the overall quality of the game and make sure that it looks as good as it possibly could. One of the big changes with FSX: Steam Edition was the changes to the graphics output of the game. It’s important, then, that you are able to get the full benefits of these changes.

Many small bugs and conflicts existed within the final code that were supposed to have been dealt with, and could cause significant problems to the quality of gameplay for users. These have been resolved to make sure that you no longer will get glitches like;

A big issue with add-ons and installations has been that compatibility simply hasn’t been there. Small changes that seem insignificant now rendered some of the best FSX packages and add-ons totally unusable.

This update includes two key packages – dll.xml and exe.xml – to give you access to the files needed to make just about any add-on work now. If you still have any problems with having add-ons work, you should consider contacting Dovetail Games here.

There has been a large amount of changes made to improve and optimize your overall performance, making it easier than ever before to actually just enjoy what you are doing within FSX. There will be more updates in the future and, when they are announced, we will be sure to give you access to a full change list so that you can understand the dynamics of what you need to do.

Not every issue has been fixed in here, granted, but it’s positive to see that a release has been brought out so early! These changes will correct a lot of the main issues with getting into the system in the first place, though.

In my opinion the Steam edition of FSX, after the current fixes, performs significantly better than the FSX boxed edition. It is much more stable; I've had no crashes after 35 hours whereas crashes with the boxed edition were a seemingly daily occurrence. Also, I am able to run FSX now with maximum graphics and realism adding much detail to the various views. I especially like the Steam rendering of water; its bluer and much more realistic. I am able to install 3rd party freeware scenery enhancements with no problem.

For me, the Steam edition of FSX is a great product; I love it!

Thanks for your comment Bonner. Many users are reporting the same: less crashing, better stability and overall improvements in performance of the Steam Edition. Hopefully other people will comment and report the same.

Hi can I know if f Flight Simulator Steam version is the same as Fsx gold edition? Thanks

i get errors regarding the sp1and sp2 when i install addons. after installing some addons ask for sp1 or sp2. trying to install sp1 i get an error that only the original version is supported.

Hi,just a long shot to see if anyone can help me with a steam,fsx ut2 problem.when i loadup fsx on steam i get a message saying do i want to install ut2,version 2.0.0.0 config entry number 2.when i reply yes i then get an error message of This feature requires that (smartassembly) is available on this computer. i have tried looking for a fix on the ut2 forums etc but seem to keep going round in circles.i have removed and then replaced ut2 and run the ut2 power pack aswell.

I have the same issue as Ken with my fsx boxed version. Is that corrected with the steam down loaded version?

Could you please advise me if all the bugs have been fixed in FSX Steam? As my boxed copy of Microsoft FSX is again closing down due to a fault.

I purchased FSX Steam last January but I had a few problems and would like to re-install as there are no updates for Microsoft FSX.

My drive failed and I had to re-install Windows 7 and Steam.

I would like to know why, after a successful original install early Sept 2015 on a brand new Win 7 64bit platform why I can't install now?

My Windows 7 updates are all complete and I have no changes in comparison to the Sept install. However, I keep getting error 1005. No explanation but after that, just failure. The only program I know has changed is Steam... due to the continued updates.

How can I solve this? I enjoyed Steam very much until I lost my hard drive and now I am grounded with no solutions, no feedback, no support...What is up?

My drive failed and had to re-install windows 7 and steam. I would like to know that after a succesful original install early sept 2015 on a brand new win 7 64bit platform why I cant install now. My windows 7 updates are all complete and I have no changes in comparison to the sept install However, I keep getting error 1005. No explanation but after that, just failure. The only program I know has changed is steam.. due to the continued updates. How can I solve this. I enjoyed steam very much until I lost my hard drive and now I am grounded with no solutions, no feedback, no support? Wha