Mooney Acclaim. This changes the Bravo over to the Acclaim. Both planes are similar in their airframe, with a few minor adjustments. The engine and other factors make it differ from the Bravo. The difference is night and day when flying it.

Mooney Acclaim. This changes the Bravo over to the Acclaim. Both planes are similar in their airframe, with a few minor adjustments. The engine and other factors make it differ from the Bravo. The difference is night and day when flying it. 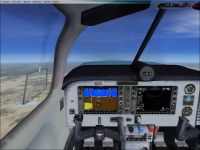 This changes the mooney bravo over to the mooney acclaim. The files included are necessary for the true renaming of it from Bravo to Acclaim. The bravo and acclaim pretty much share the same airframe. With a few minor adjustments which have been included in the cfg file. The major modifcations done in cfg are the engine and other factors that make it differ from the bravo plane. The difference is night and day when flying it. More power, better feel etc. Specs where done to the tee as far as the stats and spec of the new mooney acclaim. This info was hard to find since the plane is so new. So please enjoy. I will keep updating this file as I get more info from mooney. This is release 1. Check back every once in a while to see if the file has not gone to release 2.

Please backup the files that are listed in the zip file. But I really see no need to.

To prevent less confusion the folder still remains mooney bravo.
But you know if the install went correctly if FSX says Mooney Acclaim.
Please ensure that the aircraft.cfg file is correctly placed.

Go to the mooney bravo folder

then go to the model.g1000 folder and do the same

The archive acclaim.zip has 9 files and directories contained within it.

Nice aircraft but how do you change the NAV2 frequency?