A-1J Skyraider FDE Update. This is an FDE update for Tim Conrad's A-1J Skyraider model (A-1J_SKYRAIDER.ZIP). The primary changes are in the .air file for smoother flight handling characteristics, and also modifications/additions to the config file including the contact points (main gear/ground...

A-1J Skyraider FDE Update. This is an FDE update for Tim Conrad's A-1J Skyraider model (A-1J_SKYRAIDER.ZIP). The primary changes are in the .air file for smoother flight handling characteristics, and also modifications/additions to the config file including the contact points (main gear/ground stance), toe brake force, tailhook, launch assistance. The aim of this update besides refining flight handling was to tweak the model to be able to facilitate its use with moving AI aircraft carrier programs for upcoming naval repaints for this model. Special thanks to Michael Davies for his help on the contact points. By Bry Hardee.

These are modified config and airfiles for Tim Conrad's new FSX A-1J Skyraider. The fixes include a modified airfile to smooth out minor handling/stability issues and a tweaked config file for AI Carrier Ops. As a reference for flight handling characteristics, I used the Razbam A-1 Skyraider Volume 2 from FS9 which I was a first day customer of that fine Flightsim model when it came out. That was and still is a great model. I always felt the Razbam Skyraider flight model was very smooth and stable so it made since to try and come close to it as I could. My updates are fairly close to the Razbam airfile but not totally identical throughout the tables. The main effect of the changes are smoother more uniform/stable roll moments as well as better coordinated standard rate/non-coordinated(steep) turn behavior.

The config file did not get much modification for the reason that I was afraid some of the armament/weight configs might be affected and certain animations to not show up/work properly. What was changed was the tailhook settings and the addition of a launch assistance entry in case Catapult shots are desired with AI Carrier use (for the upcoming Naval repaints for the model). Also the tailwheel contact point damage entry was changed to make it stronger to prevent inadvertent failures on moving carrier traps. Last but not least the contact points were adjusted to try and dampen the hopping effect being reported by some people as well as just fine tune the overall main gear/tailwheel settings/ground stance to improve things a bit. Thanks to Michael Davies for his time and assistance with this.
Also of note, the toe brakes effectiveness was rolled back to prevent tip-overs(they were rather grabby).

The model was tested with AI Carriers and worked great.
Recommended operating envelope for landing on AI Moving Carriers is as follows: First and most importantly, set the wind in FSX weather settings to blow at no less than 8 knots up to 16 knots directly down the deck on the same heading as the plane and ship. Set Low fuel and empty weapons payload, on final configure for full flaps with gear and hook extended(configuring done during the downwind cycle). Hold nose attitude slightly high on final at about 95 to no lower that 88kias. Depending on weight, the speeds can range a little above ot slightly below those numbers. These speeds may seem unrealistic but taildraggers came aboard very slow compared to their swept wing jet counterparts. With a headwind, full flaps @ low weight and a moving deck, forward speed will feel very low with slow deck closure. You'll get there!

Be careful in your stick inputs during approach as you will be barely above stall speed-MCA(Maneuvering @ Critical Airspeed) At ramp maintain steady nose up attitude(not too high), stay on glide slope and then cut power holding nose attitude just at the wires to settle on all 3 wheels at the same time(3 point landing)but do not flare!. When touchdown occurs, hold full back pressure on the elevator until the plane comes to a stop then applying toe brakes. Takes a little practice but it will become easier as more are done.

Install- Just drop into you’re a-1J Skyraider folder. That's it. Back up your original files in case you wish to change back.

Legals: Freeware only, not to be used or sold as payware. Use at your own risk!

Credits, easy- Tim Conrad for making such great freeware models for us all. Thanks Tim! Ron & Company at Razbam. The SOH staffers and members who are great at sharing ideas and helping folks in our hobby.
Michael Davies for being a great help and very patient with questions about how a lot of this stuff works.

And last but not least my Bro's at Throttleback.net who help beat the dents out during testing!! Godbless all those who share the Love of Flight!

The archive a-1jupt.zip has 6 files and directories contained within it. 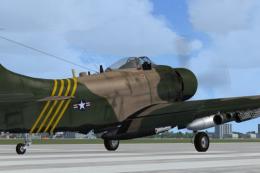 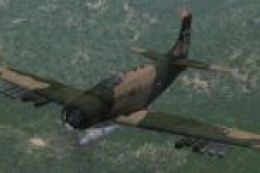 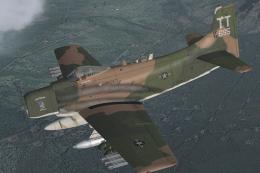 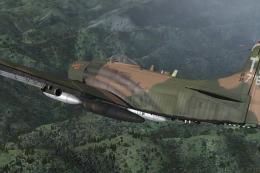 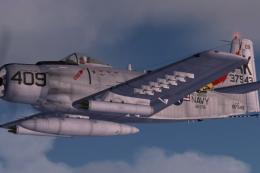 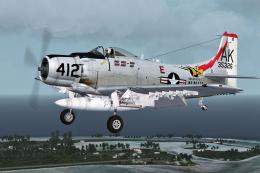 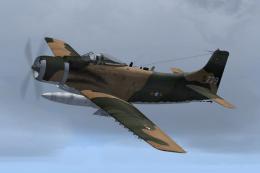 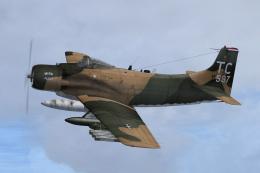 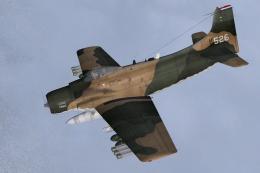