A repaint of the RealAir Spitfire 2008 MkXIV as a PRXIX Spitfire of 541 Squadron (motto: "Alone Above All") flown by the Battle of Britain Memorial Flight. Fitted with a pressurized cockpit, the historical aircraft performed high altitude PR missions over the European theater from early 1944 to the end of the war. Some say that the Spitfire XIX is "the most beautiful aircraft of them all". 32-bit textures by Grant MacLean/Sean Moloney/RealAir.

With humble apologies, these replace the original SPITBBMF.ZIP and SPITBBM2.ZIP textures, with thanks to Barrie Larke and Nico Jurgens for pointing out the snafus. (Moral: excitement about a great new model sparking multiple repaints uploaded to multiple sites is fine, but don't let it screw things up.)

Spitfire PRXIXs were unarmed and could fly at 370mph at 40,000 feet with a range of 1500 miles. Mk XIX Spitfires represent the ‘top end' of development of the Spitfire and indeed of piston engine aircraft. Some say that the Spitfire XIX is "the most beautiful aircraft of them all".

PM631 (cn 6S/683528) entered service in 1946 and was modified in the ‘fifties for meteorological reconnaissance work. In 1957 it became one of the three founder members of the RAF Historic Aircraft Flight.

3. Copy the text between the asterisks below into the AIRCRAFT.CFG file in your RealAir Spitfire XIV 2007 folder, at the end of the previous [fltsim.X] entries, replacing the 'X' in [fltsim.X] with the next sequential number.

File released as freeware, copyright Grant MacLean. It can be distributed without prior permission under the following conditions: 1) The inclusion of any individual file from this archive in another archive without the prior permission of the author is prohibited. 2) No monetary charge may be made for this archive. 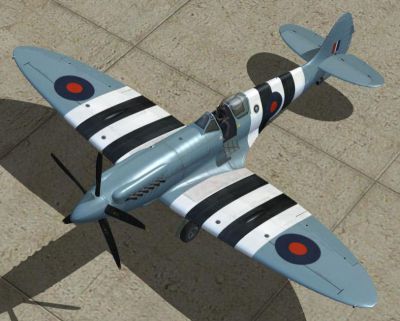 Screenshot of Supermarine Spitfire PRXIX PM631 on the ground.

The archive spitpm631.zip has 19 files and directories contained within it.