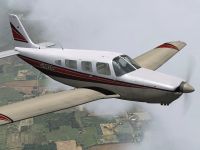 Over the past few years, Carenado has created many products for FSX and FS2004. Their latest release, Piper PA32R 301 Saratoga, offers a high performance single engine aircraft with a trendy design. Carenado previously released an FSX version of the same add-on.

Other detailed features of the PA32R 301 Saratoga SP are: pitot, antennas, baggage area, chocks, cowl plugs, custom VC panel and gauges. Although this model doesn’t have a 2D panel, it offers many more features:

Reviews by some users of this add-on seem to indicate that the Carenado Saratoga SP is a superb aircraft – the flight model is accurate and the handling characteristics appear to match users’ real-life experiences.

Some users say the Carenado version is similar to the real world Piper: it is slow climb and there is a lack of visibility due to the aircraft’s long nose. However, in spite of these drawbacks, the aircraft is generally considered to be excellent.