Screenshot of Evergreen Airbus A310-203 taking off.

The A310 first began life as the A300B10, one of a number of projected developments and derivatives of Airbus' original A300B airliner. Initially designed to serve short and medium range high-volume routes, the A310 is mostly used for medium and long range flights today. 255 planes have been built and delivered so far, production has basically stopped now, except a few freighters being delivered from time to time.

While based on the larger A300, the A310 introduced a number of major changes. The fuselage was shortened by 13 frames compared to the A300B, reducing seating to around 200 to 230 passengers and a new higher aspect ratio wing of smaller span and area was developed. New and smaller horizontal tail surfaces, fly-by-wire outboard spoilers and a two crew EFIS flightdeck were incorporated, while the engine pylons were common to suit both engine options.

This model is my first flight simulation plane development. The 3D model is created with discreet's GMAX software, textures are painted with Jasc's Paint Shop Pro. A number of GMAX/FS2002 features are included:

Unzip the distribution archive into your FS2002\aircraft folder, making sure to preserve the directory structure. The aircraft is then available as "Airbus/A310-203" in the airplane selection dialog of FS2002. 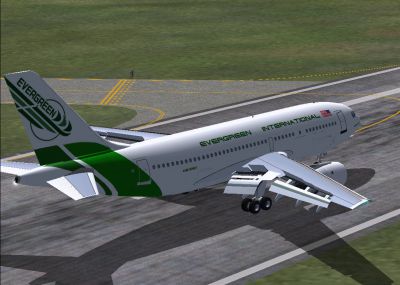 Screenshot of Evergreen Airbus A310-203 on runway.

The archive intev310.zip has 31 files and directories contained within it. 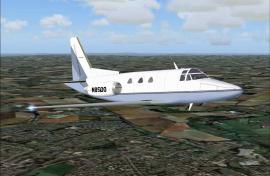