This pack features some moving naval ships as AI traffic for flight simulator X, to help you practice carrier landings.

The next time you launch FS, you will see a progress bar indicating that
Flight Simulator is reading the file. If it does not happen, check your
installation path

To see boats you need to set up a minimal amount of traffic. They are
currently programmed with 4%, so check that your "Ferries and boats"
traffic setting is greater than this value.

A Google Earth File is included (carriers.kml) which can help you to locate groups.  Most of the groups are 10-40 nm away from coast, so you won't probably see them from airports or naval air station.  Using a radar or traffic explorer map could be useful to find them.

WHAT IF I DON'T SEE BOATS ? 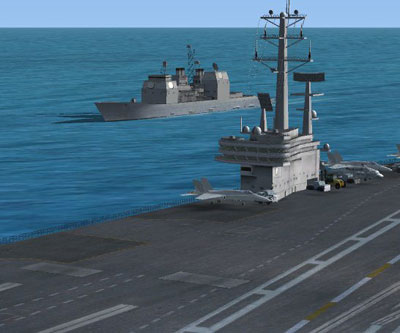 The archive aicarri1.zip has 6 files and directories contained within it.

How do you use the arrestor cables/catapult?