Portugal, intended for VFR flying. Adapts the author's previous scenery to FSX. Some of the big airports are photoreal. By Toni Agramont.

Portugal, intended for VFR flying. Adapts the author's previous scenery to FSX. Some of the big airports are photoreal. By Toni Agramont.

This scenario is an adaptation for FsX of the current scenario for fs2004. It doesn't contain any novelty. Some of the big airports they are fotorealistics. This is appreciated from the air. It is a scenario VFR. I recommend you to fly to 3000 feet to appreciate the work carried out. The AUTOGEN should be located in DENSE because my work conserves a balance among the details that it presents the AUTOGEN and the details that I have created. Water efects NONE. (to repair microsoft errors I have had to locate patch in sea ports and entrances of some rivers. These patches are based on the configuration that I indicate. I have not been able to avoid that they see each other you hoist indiscreet in some aerodrome hints. Everything is it to be claimed it to microsoft

All the scenarios are IFR for defect. This doesn't have any secret. If a country shows the corresponding radionavs the ILS in its airports it is already a scenario IFR. But I for my sensibility try to introduce details that make the scenario flown to low height live and mainly to remember the visited places. It is pitiful that Microsoft doesn't consult to the local designers of each area of the world for this way to be able to assign the colors of the adapted land. In this sense Portugal lets a lot that to want then has been assigned textures worthy of Agfanistan and he/she doesn't deserve it.

RELATIONSHIP OF CITIES FOR ALPHABETICAL ORDER

It is recommended to be provided of a tourist map to locate these cities and to fly on and among them.

They are included in enclosed list the relationship of the 30 airports and aerodromes distributed by the area of the country. Each one of them this surrounded by an average of 4 cities.

The FsX has a Directory assigned for the scenarios of third (this scenario calls Himself ADDON SCENERY Depending on this directory this. Scenery and texture.

The scenarios of third cannot be installed in any other place although if with other combinations. This depends of the dexterity and the user's experience. I explain the facet but easy and simple.

And ANYTHING MA, ABSOLUTELY ANYTHING MA Automatically the airports of Portugal were located in "Go to the Airport".

Another form of installing (Less simple).

ADDON SCENERY
Portugal
Scenery Textur Scenery Texture In this second option it is necessary to register the scenario in Library of the FsX.

ATTENTION. The entirety of the populations harmonizes with the on Autogen in GIVES YOU. I have located my houses of it forms that they synchronize with the house that presents the autogen in a certain place.

I SUGGEST YOU AN ADVENTURE

When you take off you go toward the sun that you this putting. When you arrive to the Atlantic coast you go into a little inside sea to have Estoril and Cascais to your left. Don't fly but high of 1000 ft, it Follows the coast and go into for the river Tejo It continues for their bank and it goes down to 100 ft. It follows direction toward Lisbon city. You went by their navy, nautical clubs, Tower of Belem, monument of the discoveries, Move a little toward the center of the river and raisin below the you Put on do 25 April but before you will already have seen the Monument to Christ I Laughed. It returns to the bank that you have left and soon truth the Praça do Comerço just as it is, Castelo of Sao Jorge, Cathedral, Continues flying, now already a little but high. Soon he/she will appear before your eyes the Basque Tower of Range and the bridge of their same name. It ascends to 1000 ft and go toward the south. You guided yourself for the monument to Christ I Laughed. Truth the navy of Almada. Very close this the airport of Montijo. You can land there.

To Raimondo Taburet for their mesh terrain of the central part of Portugal.

To Gerrish Gray,Ian Rampling, Gives Geis Graham P Oxtoby, and many others that I don't remember for its macros.

To Tom Hixcox and their team for their dedication to perfect Airportforwindows.

To John of Langristin for their numerous macros and textures to create houses.

To my dog Simba. The last year died.

To my wife that no longer nags me when 10 hours I happen hooked to the computer.

If you follow the simple instructions that are explained, faithfully the scenario he/she should work appropriately unless you have problems in your computer where I cannot solve anything. 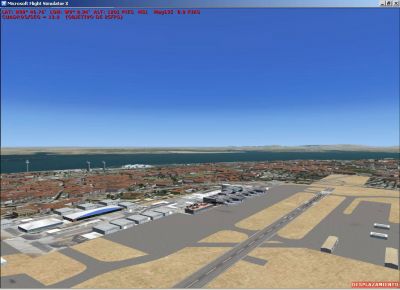 The archive portufsx.zip has 11 files and directories contained within it.