The latest release for FS2002 and CFS2 from Icarus is the Fairey Battle, one of the most promising aircraft chosen by the RAF in the 1930's. The model features multi-resolution full animations, two skins and many effects. For details, click on Read More. 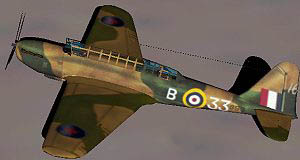 was one of the most promising aircraft chosen for RAF in the 1930s. When introduced into service in 1937 it could carry twice as many bombs over twice the distance as the Hawker Hart and Hind bombers it replaced. The aircraft includes multiresolution full animations,2 skins and new effects/ weapons:

Now on sale at Icarus: