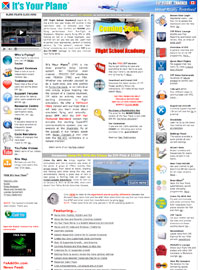 It's Your Plane has trained

Submitted in a press release received today, It's Your Plane, or as they are known, IYP announce that they have trained their virtual first officer, "Michelle", to fly the MAAM-SIM DC-3 and C-47 aircraft for Microsoft Flight Simulator 2004. It's Your Plane is a voice control system developer for Microsoft Flight Simulator X and 2004. It fully integrates with your copy of the simulator and provides voice control over functions within the sim. For example, Air Traffic Control, full control over cockpit controls; for example, having the landing gear retracted or deployed by voice control.

This press release announces compatibility with yet another popular payware aircraft.

Image shows a screen capture of the official It's Your Plane website.

IYP First Officer, Michelle, has finished her intensive training and is now ready to fly the MAAM DC-3 and C-47aircraft. The legendary IYP Co-Pilot, along with her sidekick Mike, has been anxiously waiting to fly these beauties, and she and Mike are eager to climb into the cockpit beside you and take off into the wide blue yonder.

The MAAM DC-3 and C-47 for FS9, developed by the MAAM-SIM team of the Mid-Atlantic Air Museum,

have been interfaced with IYP and both versions are parked along side the other 70 fully supported aircraft in the IYP FS9 hanger. The interface is currently a ‘passenger’ version of these planes; ‘cargo’ and ‘troop carrier’ versions are under development.

No need to wait for the weather to change, after all simmers can choose their preferred weather, so put on your Captain’s cap, pick your Co-Pilot, and take these birds up for a spin.

Over the last decade, the all-volunteer international team has produced award-winning add-on products for use with Microsoft Flight Simulator ™, faithfully replicating real aircraft of the museum's collection.

MAAM-Sim is considered an official arm of the Mid-Atlantic Air Museum and is a vital part of the revenue stream that keeps its doors open. MAAM-Sim packages are sold only by the museum and over the past decade the team has raised well over a half-million dollars for MAAM. All revenue made by MAAM-Sim goes directly to the museum to support it’s restoration programs, such as the P-61 Recovery and Restoration Project. Currently in the works and well along in development are three native FSX aircraft, one of which, the N3N-3 “Yellow Peril”, is due out this June.

For detailed information and reviews of MAAM-SIM click here.

Ten days after World War II started in Europe, the U.S. Army Air Corps (USAAC), which later became the Army Air Forces (USAAF), took over ordering all Douglas DC-3s for all branches of the military services. Until then, the DC-3 had been in operation with every major U.S. airline and 18 foreign airlines.

The Mid-Atlantic Air Museum was organized to ensure the professional stewardship of a collection that reflects the history of aviation and to enhance the public's appreciation and understanding of that history. The Museum's collection emphasizes the Mid-Atlantic region's unique contribution to flight, but is broad enough to chronicle a general history of aviation, including military aviation.

To see more about the Mid-Atlantic Air Museum click here.

Video Demonstrating It's Your Plane

Below is a video demonstration of It's Your Plane in action. It shows a Boeing 747 landing at Calgary International Airport with the software in use. The video has been taken from the official website and has been created by the manufacturer of the software.

This press released was submitted to Fly Away Simulation by Helen Cooper of It's Your Plane.