Taburet, an upcoming flight sim developer have just released their Oklahoma City Scenery package for Microsoft Flight Simulator X. The resolution of the scenery is 2 meters per pixel.

Here is the new photorealistic scenery for day and night / summer - covering the whole area of Oklahoma City. The scenery resolution is 2 m / pix. This product offers an easy, automated installation and has no negative impact on frame rates.

Besides Oklahoma County, the city limits extend into Canadian, Cleveland, and Pottawatomie counties. The city ranks as the seventh-largest city in the United States by land area which includes consolidated city-counties; it is the largest non-consolidated city-county city in the United States by land area. Oklahoma City is an important livestock market, featuring one of the top livestock markets in the world. Oil is a major product, as the city is situated in the middle of an oil field, with oil derricks even on the capitol grounds. The city has varied light and heavy industries, and the Tinker Air Force Base is also a vital source of civilian employment. 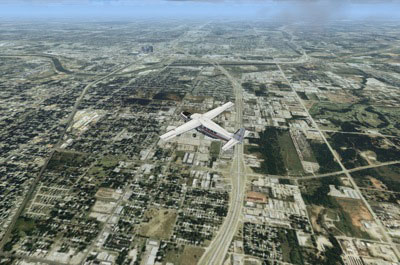