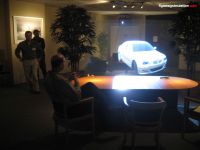 With many of the latest big budget cinema releases being available in 3D, and everyone talking about the 3D future of television, many eyes are starting to focus on 3D hologram projections...without the glasses!

Click here to jump straight down to the demonstration video.

Where does this technology originate from?

3D holographic projection technology is loosely based on an illusionary technique called “Peppers Ghost”, and was first used in Victorian theatres across London in the 1860s. Pepper's Ghost was typically used to create ghost-like figures on stage. Hidden from the audience's view, an actor dressed in a ghostly costume would stand facing an angled plate of glass. The audience would be able to see the glass, but not the actor directly. Specifically angled lighting would reflect the actor's image into the plate of glass, a transparent ghost like reflection would appear in front of the audience. Cutting or fading the lighting could also add to the ghostly effect.

How is this technology used today?

With the use of the latest HD projectors, CGI animation, specialist HD film techniques and special effects created in post production, Pepper's Ghost technology has been upgraded to the 21st century. Instead of a real object or person's reflection appearing on a plate of glass, high definition video and CGI animation is beamed directly onto a specially designed, chemically treated transparent film via a high power HD projector. Although much more expensive, this modern approach results in a much clearer, believable hologram projection.

What kind of images can be projected as holograms?

Due to the modern approach of projecting CGI animations and pre-recorded footage, almost anything is possible. The “blank canvas” approach is often adopted, creating a storyboard only limited by imagination. The storyboard can then be handed over to a CGI animation team who can make it come to life using the latest 3D software such as Maya or 3ds-Max.

Real people can be filmed giving a speech, dance or presentation for example, and then be projected as 3D holograms. Holographic special effects can be added in post production to make a life-like person beam into the room, Star Trek style, or have their product appear and spin above their head at the click of their fingers.

3D projection of a car.

Who have used 3D Holographic projections and why?

In August 2009, Endemol, the producers of the famous reality TV show Big Brother, working together with activ8-3D holographic projections, beamed housemates' friends and families into the house to deliver messages of support and encouragement. The messages were pre-recoded using HD cameras and specifically angled lighting. A stage was rigged inside the Big Brother house task room, compiling of a HD projector, media player, lighting, and audio equipment. Each housemate entered the room in turn and took a seat in front of the stage. On cue, the housemate’s family member or friend was beamed into the stage before delving their message. Although the hologram displays were difficult to judge on 2D television screens, the event was hailed as a great success, evoking brilliant reactions from the housemates which made for great TV.

“Any other screen message on video isn’t a touch on that. They are in front of you – none of this flat screen or plasma screen – they are really there.” exclaimed David.

“It’s lovely. It’s like you wanna touch it. I can’t believe it. I’m shaking,” replied Lisa.

What range of sizes can the holographic projections be displayed in?

This technology has been known to scale down to as small as a ten inch hologram display. The smaller range of holographic display units, ranging from ten inches to television sized monitors are predominantly used for retail, exhibitions and point of sale. Famous brand companies such as Diesel, have used this type of holographic display in their shop windows.

Which other technologies are being used together with 3D hologram projections?

activ8-3D, the London based holographic projection specialists, have recently developed motion capture systems to couple 3D holographic projections. Motion capture systems are far from a new technology. An actor wearing a motion capture suit can have his/her movements picked up via various sensors. These movements can then be played back in real time onto a screen in the form of an animated character. Working with hologram display technology, these characters can become life size 3D holographic animated characters, both technologies working together perfectly to complement each other.

Hologram projection displays have also recently seen advances in audience interactivity. Using a wireless remote control, the holographic projections can be moved around the stage, rotated on their x and y axis, and can even be programmed to start or stop an animation on the click of a button.

What is the future of 3D holographic projection?

3D holographic projection technology clearly has a big future ahead. As this audio visual display continues to get high profile credibility, we are likely to see more companies advertising their products or marketing their business in this way. Whether it be large scale, big budget product launches or smaller retail POS systems, they are likely to become a common feature in the advertising world.

The video demonstration below shows the first ever live digital transmission of a 3D digital projection. It shows performing artists being broadcast from London on to a stage in Florida. The video was created by Christie Digital, who are masters at using this technique.

Yes, I need this film! How much and where can I buy it? I am working on a project to go into a club here in the next couple of months.

To who it may concern, I am writing this to ask you if you have any hologram projectors for sale and how much would you sell me one for?

Hello I need to buy one of theses...

Hi, I'm a system Integrator from Malaysia and I am currently working on a project that requires Holographic equipments. Please contact me asap as we are in the midst of proposing the system to the client.

We have low cost pepper's ghost systems. Skype me on Jon3dfx or email me or see beatpixels.net

Hello Sir, I'm a student. I have an idea related to 3D hologram so for that I want these hologram technique and some help please help me out. I want to make an operating system on hologram and some more stuff so please I beg you for help.

We are an Out Of Home advert company based in Africa, we would like to make enquiries about the Hologram projector, where available and price. Best Regards

Wow. I see the press screwing up all the time with tech news.