This aircraft is built to be as close to the real thing both in performance and look. The performance was designed using the original Pilot’s Handbook which can be found at http://www.il76.boom.ru. The real aircraft is still handles a little better at high weights which I am not able to reproduce in X-Plane.

The flaps of the real aircraft are more sophisticated than in this model, and of course the real aircraft has a fixed main landing gear. The instruments were made with the help of a lot of cockpit pictures, but could not be made totally faithful to the original. The cockpit instruments are imperial, not metric like in the real aircraft.They are all labeled in Russian, though. You don’t have to speak Russian to fly this aircraft, but it helps... In any case please look at the cockpit explanation page of this .pdf where you can find out which instrument is which.

About the real aircraft

The Il-76 was designed as both a military and civil freighter in the Soviet Union. It is able to operate under extreme climates such as Siberian winter cold or desert heat. The aircraft is loaded via the aft ramp and has a built-in cargo crane making it independent from ground equipment. It can be used for airdropping cargo or paratroopers.

The cockpit is divided into two decks, the top deck being the working places of pilot, first officer and flight engineer and the lower deck containing the work stations of navigator and radio operator. The glass nose makes navigating in areas with few radio navigation facilities (like Siberia) easier. Also part of the crew is a loadmaster responsible for loading, unloading and securing the freight.

Versions are the basic version (Il-76) of which only few examples were built. Then followed the version T (which is also this X-Plane aircraft) and the M version with a tail gun turret. Most M and T versions are withdrawn from service by now. Most Il-76s are of the TD and MD versions which have more powerful engines and a slightly higher maximum take-off weight. TD versions are the civil variant and the MD have gun turrets. Apart from the Soviet Union, the Il-76s flew in a number of other countries such as Cuba, North Korea, Iraq and Lybia. After the end of the Soviet Union many Il-76s were released by the Soviet Air Force and started flying for civil operators. That’s why it is not uncommon to see Il-76s flying for civil airlines that have the tail gunner cabin (but the guns removed).

Other variants of the Il-76 include air tankers (Il-78), zero-gravity cosmonaut training aircraft (MDK), AWACS aircraft (Beriev-50) or engine testbeds (LL). The latest variant of the Il-76 is the MF which is a civil aircraft with a stretched fuselage and four Aviadvigatel PS-90 engines. So far it has not found customers.

The Il-76 production plant is located at Tashkent in Uzbekistan. Il-76s nowadays are flying mostly for cargo charter airlines. By April 2002 the Il-76s are banned from the European Union because they fail to comply with chapter three noise regulations, but before they could often be seen in Western Europe. Freight was almost anything you could imagine: machinery, cigarettes, fresh fish, flowers and from time to time also an Il-76 would be grounded because of arms trafficking. Now many aircraft (beside the area of the former Soviet Union) can be found in Arabia and Africa. Another important role of the Il-76 is relief good delivery.

Low charter costs and the ability to land almost anywhere make them a popular freighter that has recently seen service flying to Afghanistan or almost any other region of the earth where disasters like earthquakes or floods have happened. I hope this is enough inspiration for you if you are looking for some routes to fly with this machine!

All Information given in this file is intended for simulator use only and not to be used in real life aviation!

Some hints on flying

Take-offs (especially with maximum take-off weight) are not that easy. Set trim for climbing out and then push the nose down during the take-off run with the rudders. When airborne, immediately retract gear. Maintain a climb rate that allows you to accelerate. Slowly retract the flaps. Always let the aircraft build up speed before retracting the next notch. This is especially important before the final notch. At MTOW be careful to keep the pitch low on climb out. Aim for an Angle of Attack of 5°. At higher Angles the drag is too high for the aircraft to accelerate and maintain a positive climb rate.

The negative V of the wings (the wings hanging down) mean that if the aircraft is banked, it wants to bank more to the side. It is therefore very important to constantly control and adjust the bank manually. Especially if flying with full flaps you get barely enough lift to stay in the air, so if you don’t watch the bank angle, get into a too steep bank angle and loose lift, you will crash. It is very easy to destroy your aircraft if fooling around with different camera perspectives while in landing configuration. Be careful!

Once in landing configuration, it is easiest to set an N1 (depending on the weight of the aircraft and the approach speed resulting from it) and fly the aircraft down the glideslope with the rudder. It is not uncommen for Il-76s to fly approaches with negative pitch.Flaring needs a bit of practice, the wings are mounted high so they catch the ground effect at a little lower altitude than most airliners. Expect it at about 20 feet above ground, reduce N1 to about 70% and increase pitch. You should touch down at a speed of around 110 knots. 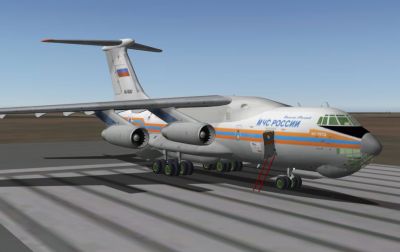 The archive Ilyushin76T.zip has 122 files and directories contained within it.

This remake of the Ilyushin IL-76 was sent to me by a friend on our forums to try out. As an aircraft that I have a lot of time for, I was quite excited to get a chance to try it out for myself and see what I think.

Well, I have to say that this mod takes about as much detail from the real thing as it possibly can. In fact, the developer even followed the official Pilot’s Handbook to give us all the detail they possibly can. It’s a great take on the aircraft, giving us something that feels far more like the real thing than many other imitations that I have tried out.

Well, with this aircraft, the only major difference between reality and simulation is how it handles weights. This aircraft tends to fly best at higher weights but it’s impossible to re-produce this kind of feature in X-Plane apparently.

Also, due to technical limitations, the flaps aren’t quite as advanced as they are in reality. The aircraft also has a fixed landing gear, again due to imitations in the hardware. With that in mind, though, the aircraft comes with one of the most helpful cockpits that I have ever used.

With brilliant cockpit instruments provided to help you get used to using many of the aircraft features, it’s as close to the original as it possibly can be. The textures are crisp and it’s easy to make out just about every fixture on the map.

With that in mind, though, the cockpit uses Imperial instrument measurements. The actual aircraft would use Metric so if you are used to the Metric system then this can quickly become very confusing indeed!

One problem I did have with this, though, was the fact that the cockpit is displayed in Russian. It’s made by a Russian so fair enough but it’s hard to work out what is being said at certain points. I will admit that I had to use the included PDF manual to try and keep in line with what was being said to begin with.

However, taking all of this into account, this is still a brilliant mod. The real aircraft itself is one of the most popular out there for fans of multi-purpose aircraft. It’s ability ot work in both desert heart and frozen winters adds to its mystique, but it is genuinely one of the most reliable aircraft you are likely to come across.

The developers, then, have done a wonderful job of making sure that this feels genuine and real. I’d happily recommend that anyone who wishes to make the most of their time in X-Plane considers giving this a try out!