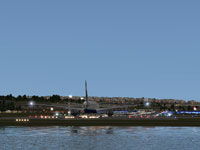 X-Plane flight simulator series has been with us for many years now, and from Version 9, we can say it has been a good competitor in the flight simulation market; for both PC/Mac home use and for professional flight simulation installations. Announced earlier this year was Version 10 of the X-Plane package. Version 10 will bring amazing new features such as better graphics, world environments and cockpit/flight functionality. While the full feature list hasn't yet been released by Laminar Research (the developers of X-Plane), we have cited some of the confirmed details from around the Internet.

Before we get into the details of what we can expect in terms of functionality and improvements within X-Plane 10, we're going to talk a little about the release date and delay in getting this version to the market.

Back in 2009, X-Plane 10 was put onto the design table and many features were discussed within the team. Ideas from the community were taken into consideration using sources from forums, users comments and new ideas from the developers. At the X-Plane Congress 09, developers and members from X-Plane.org (an official X-Plane community forum and website) discussed some of the features to be included, or at least taken into consideration while developing v10.

At this congress, a transcript from X-Plane.org administrator Nicolas (who was present at the congress) noted the following points that were discussed:

As you can see, many great features were to be considered to be included in version 10.

A screenshot demonstrating a whole neighbourhood scenery in X-Plane 10. This shows the level of world scenery and environment detail you can expect from this release.

X-Plane was announced, on the official X-Plane website to be projected to be released on or around December 2010, however this date has now changed because the development team are not happy with the release yet, and they feel that releasing this version early would not allow them enough time to include all of the functionality they would like; after all, this has now got to compete with Microsoft's next flight simulator package, Microsoft Flight - which Microsoft announced late 2010 due for release in 2011. As stated on the X-Plane website, With all the new technologies we’re bringing together in X-Plane 10, we believe the new simulator will be a major new landmark in X-Plane’s history. We know how eager our fans are to see the finished product, but this delay will ensure that the product you see is one that will elevate X-Plane to an entirely new level. - meaning they want X-Plane 10 to be completely finished and complete before it's released to the general public.

While this hasn't yet been announced, we are expecting to see X-Plane released Q2 or Q3 2011. This will be released around the same time as Microsoft Flight. Stay tuned here and the release date will be updated and announced when we have information from the official X-Plane developers.

We are covering most of the release right here and you can find out about the latest X-Plane news and information without searching the Internet. Some information on the release and preview videos can be found using the following links:

Could you tell me what airport that is in the screenshot by the water? Thanks!