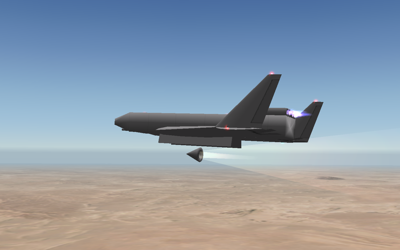 The DSB-36 or Deep Space Bomber is the primary strike craft for S.A.C. in the year 2546 during the events in Interstellar Highway

I've based the design on the three view drawing the author of the TBO series posted here, as well as the resulting discussion.

this is the first aircraft I've felt was complete enough to release here. the earlier versions had problems including being nose heavy at speeds under 400 mph, I've solved this by adding a thin wing inside the main wing so that the flaps come down in the middle of the wing instead of at the trailing edge, and by adding slots to the main wing.

the engines are a hybrid jet/rocket where the rockets produce practically zero thrust at ground level and start producing more as the jets pass optimal altitude, coming into their own in vacuum as the jets die. this is the only way I've found to replicate the triple phase turbo/scram/rocket engines that has been the mainstay in high performance air craft in the TBOverse sense the technology was proven during High Frontier in 1986.

the jato is vastly over powered and should be used for boosts in orbit. the bomb bay doors are simulated by a folding wing with a very thin airfoil (included), its armament includes a pair of heavy mass drivers in the nose and 8 Hibex air to ground rockets. i was having some trouble with the weapon selector switches so weapon selection may be done using the screen to the right of the cockpit

it has a puffer system and the engines are equipped with thrust vectoring for pitch, roll, and yaw. you will have to vector the thrust up or keep the stick pulled slightly back to keep it from entering a spin.

its my first upload so naturally it needs work, including a better paint job.

The archive DSB_36.zip has 8 files and directories contained within it.